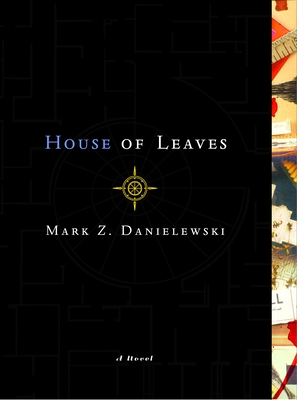 At its center, House of Leaves is a haunted house story. Will Navidson has moved into a new house, one that turns out to be bigger on the inside. Like the house itself, the novel has several layers. It's a story about a story about a film about a labyrinthian house that seemingly has no end. Each narrative is nested within the previous one, and as the situation for Will gets more dire, so too are each of our other protagonists wrapped up within the puzzle. And, like the characters involved, even the narrative structure begins to fray at the edges, until it falls to pieces at the end.

An intensely creepy read. Danielewski weaves together multiple narratives, and fluctuates between horror, autobiography, and academia. Uncertainty as to what is "real" and what is fiction adds to the delightful sense of unease this book provokes. House of Leaves will have you feeling like childhood fears of the nameless, unseen monster hiding under your bed or in the closet weren't so unreasonable after all.

“A novelistic mosaic that simultaneously reads like a thriller and like a strange, dreamlike excursion into the subconscious.” —The New York Times

Years ago, when House of Leaves was first being passed around, it was nothing more than a badly bundled heap of paper, parts of which would occasionally surface on the Internet. No one could have anticipated the small but devoted following this terrifying story would soon command. Starting with an odd assortment of marginalized youth -- musicians, tattoo artists, programmers, strippers, environmentalists, and adrenaline junkies -- the book eventually made its way into the hands of older generations, who not only found themselves in those strangely arranged pages but also discovered a way back into the lives of their estranged children.

Now this astonishing novel is made available in book form, complete with the original colored words, vertical footnotes, and second and third appendices.

The story remains unchanged, focusing on a young family that moves into a small home on Ash Tree Lane where they discover something is terribly wrong: their house is bigger on the inside than it is on the outside.

Of course, neither Pulitzer Prize-winning photojournalist Will Navidson nor his companion Karen Green was prepared to face the consequences of that impossibility, until the day their two little children wandered off and their voices eerily began to return another story -- of creature darkness, of an ever-growing abyss behind a closet door, and of that unholy growl which soon enough would tear through their walls and consume all their dreams.

Mark Z. Danielewski was born in 1966. House of Leaves is his first novel.

“Any hope or fear that the experimental novel was an aberration of the twentieth century is dashed by the appearance of Mark Z. Danielewski’s House of Leaves, the first major experimental novel of the new millennium. And it’s a monster. Dazzling.”
—The Washington Post Book World

“[Its] chills spark vertigo, its erudition brings on dislocating giddiness . . . House of Leaves is dizzying in every respect.”
—Entertainment Weekly

“Stunning . . . What could have been a perfectly entertaining bit of literary
horror is instead an assault on the nature of story.”
—Spin

“This demonically brilliant book is impossible to ignore, put down, or persuasively conclude reading. In fact, when you purchase your copy you may reach a certain page and find me there, reduced in size like Vincent Price in The Fly, still trapped in the web of its malicious, beautiful pages.”
—Jonathan Lethem, author of Motherless Brooklyn

“[A] tour de force first novel. [It] can keep you up at nights and make you never look at a closet in quite the same way again . . . Staggeringly good fun.”
—Chicago Sun-Times

“A novelistic mosaic that simultaneously reads like a thriller and like a strange, dreamlike excursion into the subconscious.”
—The New York Times

“If you can imagine that Peter Pan’s enemy is not Captain Hook but Neverland itself, or that the whale that swallows Jonah is Moby-Dick, you’ll begin to appreciate what this book is about. Anticipate it with dread, seize, and understand. A riveting reading experience.”
—Gregory Maguire, author of Wicked: The Life and Times of the Wicked Witch of the West

“Grabs hold and won’t let go . . . The reader races through the pages exactly as her mind races to find out what happens next.”
—The Village Voice