Rising Like a Storm (The Wrath of Ambar #2) (Hardcover) 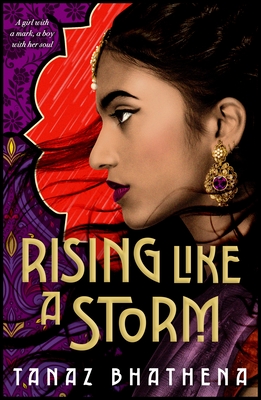 This is book number 2 in the The Wrath of Ambar series.

In the concluding installment to the Wrath of Ambar duology from masterful author Tanaz Bhathena, Gul and Cavas must unite their magical forces—and hold onto their growing romance—to save their kingdom from tyranny.

With King Lohar dead and a usurper queen in power, Gul and Cavas face a new tyrannical government that is bent on killing them both. Their roles in King Lohar's death have not gone unnoticed, and the new queen is out for blood. What she doesn't know is that Gul and Cavas have a connection that runs deeper than romance, and together, they just might have the strength and magic to end her for good.

Then a grave mistake ends with Cavas taken prisoner by the government. Gul must train an army of warriors alone. With alliances shifting and the thirst for vengeance growing, the fate of Ambar seems ever more uncertain. It will take every ounce of strength, love, and sacrifice for Gul and Cavas to reach their final goal—and build a more just world than they've ever known.

Tanaz Bhathena writes books for young adults. Her fantasy novel Hunted by the Sky was named a Best Book of the Year by the CBC and USBBY, and is the first of a YA fantasy duology set in a world inspired by medieval India. Her novel The Beauty of the Moment won the Nautilus Gold Award for Young Adult Fiction and has also been nominated for the Ontario Library Association’s White Pine Award. Her acclaimed debut, A Girl Like That, was named a Best Book of the Year by numerous outlets including The Globe and Mail, Seventeen, and The Times of India. She lives in Missisauga, Ontario, with her family.