Woes of the True Policeman: A Novel (Hardcover) 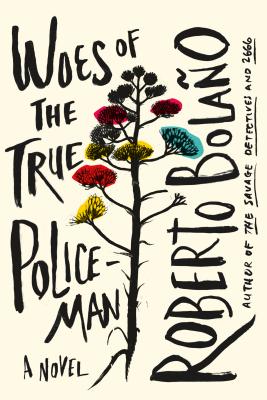 Begun in the 1980s and worked on until the author's death in 2003, Woes of the True Policeman is Roberto Bolaño's last, unfinished novel.

The novel follows Óscar Amalfitano—an exiled Chilean university professor and widower—through the maze of his revolutionary past, his relationship with his teenage daughter, Rosa, his passion for a former student, and his retreat from scandal in Barcelona.

Forced to leave Barcelona for Santa Teresa, a Mexican city close to the U.S. border where women are being killed in unprecedented numbers, Amalfitano soon begins an affair with Castillo, a young forger of Larry Rivers paintings. Meanwhile, Rosa, Amalfitano's daughter, engages in her own epistolary romance with a basketball player from Barcelona, while still trying to cope with her mother's early death and her father's secrets. After finding Castillo in bed with her father, Rosa is forced to confront her own crisis. What follows is an intimate police investigation of Amalfitano that involves a series of dark twists, culminating in a finale full of euphoria and heartbreak.

Featuring characters and stories from his other books, Woes of the True Policeman invites the reader more than ever into the world of Roberto Bolaño. It is an exciting, kaleidoscopic novel, lyrical and intense, yet darkly humorous. Exploring the roots of memory and the limits of art, Woes of the True Policeman marks the culmination of one of the great careers of world literature.

Roberto Bolaño was born in Santiago, Chile, in 1953. He grew up in Chile and Mexico City, where he was a founder of the Infrarealist poetry movement. His first full-length novel, The Savage Detectives, received the Herralde Prize and the Rómulo Gallegos Prize when it appeared in 1998. Roberto Bolaño died in Blanes, Spain, at the age of fifty.

Natasha Wimmer is a translator who has worked on Roberto Bolaño’s 2666, for which she was awarded the PEN Translation prize in 2009, and The Savage Detectives. She lives in New York.

“The most significant Latin American literary voice of his generation.” —The New York Times Book Review

“One of our greatest writers...Latin American letters (wherever it may reside) has never had a greater, more disturbing avenging angel than Bolaño.” —Junot Díaz, The New York Times Book Review

“The writing never feels stale but, rather incredibly, shines anew....The publication of a Bolaño novel, complete or not, is never anything less than an event of language and devilish wit.” —The Wall Street Journal

“Bolaño [seems] to come from an understanding that people are portholes; that a creation can represent singular space that otherwise would go unknown....He allows the novel to vibrate through its box.” —Vice

“Full of delights...like watching a master magician unpacking his bag of tricks.” —The New Orleans Times-Picayune