The Silent Corner: A Novel of Suspense (Jane Hawk #1) (Paperback) 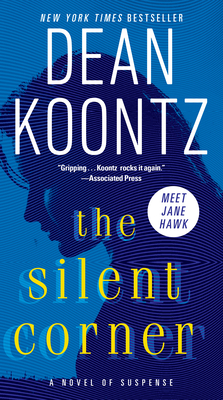 This is book number 1 in the Jane Hawk series.

My Favorite Scary Future Scenario —The new Jane Hawk series by Dean Koontz leading off with The Silent Corner , followed by The Whispering Room, are a couple of the scariest books I’ve read, with no creepy supernaturals, just creepy humans.

“Koontz's new heroine is Jane Stark, a kick-ass-and-take-names FBI agent who is out to discover why her husband took his own life. When she finds out that other people in key positions are also committing suicide, the more mysterious and complicated the circumstances become and the more attention she draws to herself - and not in a good way. Koontz is a master of suspense, creating sharp twists and turns with originality that will challenge your intellect. The Silent Corner is a gripping, enthralling thriller. I can't wait for the next installment!”
— Robin Allen (W), Forever Books, Saint Joseph, MI

A dazzling new series, a pure adrenaline rush, debuts with Jane Hawk, a remarkable heroine certain to become an icon of suspense

“I very much need to be dead.”

These are the chilling words left behind by a man who had everything to live for—but took his own life. In the aftermath, his widow, Jane Hawk, does what all her grief, fear, and fury demand: find the truth, no matter what.

People of talent and accomplishment, people admired and happy and sound of mind, have been committing suicide in surprising numbers. When Jane seeks to learn why, she becomes the most-wanted fugitive in America. Her powerful enemies are protecting a secret so important—so terrifying—that they will exterminate anyone in their way.

But all their power and viciousness may not be enough to stop a woman as clever as they are cold-blooded, as relentless as they are ruthless—and who is driven by a righteous rage they can never comprehend. Because it is born of love.

Look for a special preview of Dean Koontz’s next Jane Hawk novel, The Whispering Room, in the back of the book.

Praise for The Silent Corner

“Gripping . . . The paranoia and mystery increase as the story unfolds. . . . Koontz has created such a wonderful character in Jane Hawk that . . . readers will clamor for more tales involving Hawk and her quest for justice. Koontz rocks it again.”—Associated Press

“The latest page-turner by Dean Koontz introduces readers to Jane Hawk . . . an inspired choice for a protagonist, by far the strongest part of a reliably entertaining book by the perennial bestselling author. . . . Action, zippy dialogue and a winning character at the center of the book, part of a new series by Koontz.”—Minneapolis Star-Tribune

“In this era of stingy text-message prose, Mr. Koontz is practically Shakespeare. . . . The Silent Corner brims with both action and emotion.”—Pittsburgh Post-Gazette

Dean Koontz, the author of many #1 New York Times bestsellers, lives in Southern California with his wife, Gerda, their golden retriever, Elsa, and the enduring spirits of their goldens, Trixie and Anna.

“Gripping . . . The paranoia and mystery increase as the story unfolds. . . . Koontz has created [a] wonderful character in Jane Hawk. . . . Koontz rocks it again.”—Associated Press

“In this era of stingy text-message prose, Mr. Koontz is practically Shakespeare. . . . The Silent Corner brims with both action and emotion.”—Pittsburgh Post-Gazette

“The Silent Corner is vintage Dean Koontz: paranoia-fueled suspense . . . sleek and highly realized action, developed characters, and more twists and turns than any two ordinary novels combined. . . . As relevant to current events as it is audacious . . . amongst Dean Koontz’s finest contemporary work.”—Mystery Scene

“A proven specialist in action scenes, Koontz pulls off some doozies here. . . . The book is full of neat touches. . . . And the prose, as always in a Koontz novel, is first-rate. Perhaps Koontz’s leanest, meanest thriller, this initial entry in a new series introduces a smart, appealing heroine who can outthink as well as outshoot the baddest of bad dudes.”—Kirkus Reviews (starred review)

“The latest page-turner by Dean Koontz introduces readers to Jane Hawk. . . . An inspired choice for a protagonist . . . action, zippy dialogue and a winning character at the center of the book, part of a new series by Koontz.”—Minneapolis Star-Tribune

“Long an A-list bestseller, Koontz has always delivered the goods. . . . [His] varied bibliography now adds a new series and an exciting new heroine.”—Booklist