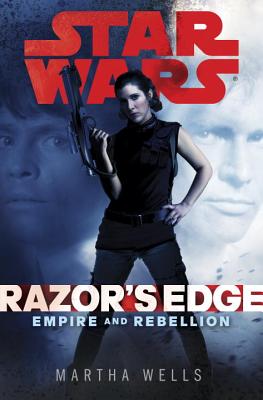 By Martha Wells
Unavailable to Order
Hard to Find

When rebels clash with renegades, it’s the Empire that may claim the final victory.

Times are desperate for the Rebel Alliance. Harassment by the Empire and a shortage of vital supplies are hindering completion of a new secret base on the ice planet Hoth. So when Mid Rim merchants offer much-needed materials for sale, Princess Leia Organa and Han Solo lead an Alliance delegation to negotiate a deal.

But when treachery forces the rebel ship to flee into territory controlled by pirates, Leia makes a shocking discovery: the fierce marauders come from Leia’s homeworld of Alderaan, recently destroyed by the Death Star. These refugees have turned to pillaging and plundering to survive—and they are in debt to a pirate armada, which will gladly ransom the princess to the vengeful Empire . . . if they find out her true identity.

Struggling with intense feelings of guilt, loyalty, and betrayal, Leia is determined to help her wayward kinspeople, even as Imperial forces are closing in on her own crippled ship. Trapped between lethal cutthroats and brutal oppressors, Leia and Han, along with Luke, Chewbacca, and a battle-ready crew, must defy death—or embrace it—to keep the rebellion alive.

Martha Wells was born in 1964 in Fort Worth, Texas, and graduated from Texas A&M University with a B.A. in anthropology. She is the author of more than a dozen science fiction and fantasy novels, including the Nebula-nominated The Death of the Necromancer, as well as a number of short stories and nonfiction articles. Her books have been published in seven languages.