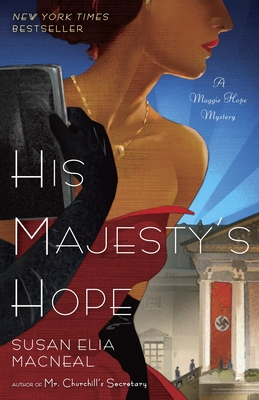 This is book number 3 in the Maggie Hope series.

This third entry in the Maggie Hope series - following Mr. Churchill's Secretary (MWA Edgar Award nominee) and Princess Elizabeth's Spy - continues the WWII espionage adventures of this British-born, American-raised UK spy.  This time Maggie finds herself behind enemy lines on her first undercover assignment after finishing spy school.  Testing her mettle in the face of real danger in Berlin brings Maggie face-to-face with an unresolved and complicated aspect of her family's history of spies.  At the completion of her mission and on her own initiative, Maggie decides to take the opportunity to work for a high-ranking Nazi official in order to obtain first-hand information on one of Germany's operations - Compassionate Death.  A must read for anyone interested in female protagonists, the UK, or the intricacies of family relations during wartime.

NEW YORK TIMES BESTSELLER • For fans of Jacqueline Winspear, Laurie R. King, and Anne Perry, whip-smart heroine Maggie Hope returns to embark on a clandestine mission behind enemy lines where no one can be trusted, and even the smallest indiscretion can be deadly.

World War II has finally come home to Britain, but it takes more than nightly air raids to rattle intrepid spy and expert code breaker Maggie Hope. After serving as a secret agent to protect Princess Elizabeth at Windsor Castle, Maggie is now an elite member of the Special Operations Executive—a black ops organization designed to aid the British effort abroad—and her first assignment sends her straight into Nazi-controlled Berlin, the very heart of the German war machine. Relying on her quick wit and keen instincts, Maggie infiltrates the highest level of Berlin society, gathering information to pass on to London headquarters. But the secrets she unveils will expose a darker, more dangerous side of the war—and of her own past.

“You’ll be [Maggie Hope’s] loyal subject, ready to follow her wherever she goes.”—O: The Oprah Magazine

Susan Elia MacNeal is the Barry Award–winning and Edgar, Dilys, and Macavity Award–nominated author of the Maggie Hope mysteries, including Mr. Churchill’s Secretary, Princess Elizabeth’s Spy, His Majesty’s Hope, and The Prime Minister’s Secret Agent. She lives in Park Slope, Brooklyn, with her husband and child.

“You’ll be [Maggie Hope’s] loyal subject, ready to follow her wherever she goes.”—O: The Oprah Magazine

Praise for the Maggie Hope Mysteries

“With false starts, double agents, and red herrings . . . MacNeal provides a vivid view of life both above and below stairs at Windsor Castle.”—Publishers Weekly, on Princess Elizabeth’s Spy

“A captivating, post-feminist picture of England during its finest hour.”—The Denver Post, on Mr. Churchill’s Secretary