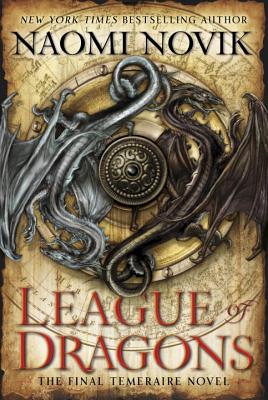 This is book number 9 in the Temeraire series.

With the acclaimed Temeraire novels, New York Times bestselling author Naomi Novik has created a fantasy series like no other, combining the high-flying appeal of Anne McCaffrey's Pern saga and the swashbuckling derring-do of Patrick O'Brian's historical seafaring adventures. Now, with League of Dragons, Novik brings the imaginative tour de force that has captivated millions to an unforgettable finish. Napoleon's invasion of Russia has been roundly thwarted. But even as Capt. William Laurence and the dragon Temeraire pursue the retreating enemy through an unforgiving winter, Napoleon is raising a new force, and he'll soon have enough men and dragons to resume the offensive. While the emperor regroups, the allies have an opportunity to strike first and defeat him once and for all--if internal struggles and petty squabbles don't tear them apart. Aware of his weakened position, Napoleon has promised the dragons of every country--and the ferals, loyal only to themselves--vast new rights and powers if they fight under his banner. It is an offer eagerly embraced from Asia to Africa--and even by England, whose dragons have long rankled at their disrespectful treatment. But Laurence and his faithful dragon soon discover that the wily Napoleon has one more gambit at the ready--one that that may win him the war, and the world. Praise for League of Dragons "Novik has accomplished something singular with her Temeraire series. It's long. It's sumptuous. . . . It's a story about friendship that transcends not only time and class, but species. . . . League of Dragons masterfully wraps up so many plot threads and loose ends that had built up throughout the previous eight books but] Novik never forgets that, as complex as her ideas and plot may get, the very simple notions of friendship and loyalty lie at the heart of the series."--NPR "A satisfying conclusion to a remarkable series."--Kirkus Reviews (starred review) "Thrilling scenes of aerial combat are interspersed with detailed character work, moral complexities, and political maneuvering. Novik expertly balances a myriad of plotlines and characters and offers an extremely satisfying resolution."--Booklist (starred review) "This thrilling installment is packed with action and excitement, drawing the series to a delightful and satisfying close with plenty of twists, misadventures, and aerial combat along the way."--Publishers Weekly (starred review) "Novik's fans won't be disappointed."--Library Journal "League of Dragons sticks the landing. . . . And the book also has an abundance of the things that I love about the series: deep and inventive worldbuilding; fabulous action scenes; so many complex characters and relationships that have been built up over the series; humor (I literally laughed out loud multiple times); and the general project of taking the nineteenth century and making it better. . . . League of Dragons is an ending to the series, it is a definitive one, and it is a satisfying one. Go read it."--Tor.com "A satisfactory sendoff to one of the most thrilling and immersive fantasy series on today's shelves . . . Novik packs in plenty of what made this series a hit in the first place, particularly acutely imagined battle scenes, high-stakes decisions and snappy dialogue from those delightful dragons, who have as much or more intelligence as humans, coupled with the innocent self-interest of the average cat."--Shelf Awareness

Naomi Novik is the acclaimed author of the Temeraire series: His Majesty's Dragon, Throne of Jade, Black Powder War, Empire of Ivory, Victory of Eagles, Tongues of Serpents, Crucible of Gold, Blood of Tyrants, and League of Dragons. She has been nominated for the Hugo Award and has won the John W. Campbell Award for Best New Writer, as well as the Locus Award for Best New Writer and the Compton Crook Award for Best First Novel. She is also the author of Uprooted and the graphic novel Will Supervillains Be on the Final? Fascinated with both history and legends, Novik is a first-generation American raised on Polish fairy tales and stories of Baba Yaga. Her own adventures include pillaging degrees in English literature and computer science from various ivory towers, designing computer games, and helping to build the Archive of Our Own for fanfiction and other fanworks. Novik is a co-founder of the Organization for Transformative Works. She lives in New York City with her husband, Charles Ardai, the founder of Hard Case Crime, and their daughter, Evidence, surrounded by an excessive number of purring computers.