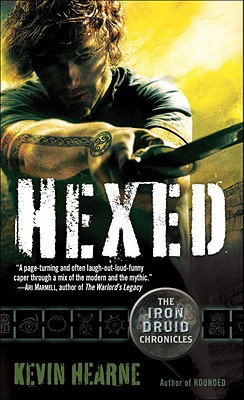 This is book number 2 in the The Iron Druid Chronicles series.

“A page-turning and often laugh-out-loud-funny caper through a mix of the modern and the mythic.”—Ari Marmell, author of The Warlord’s Legacy

Atticus O’Sullivan has had cause to mistrust witches in his storied past, but he’s willing to live and let live with the Sisters of the Three Auroras, a legendary local coven, even going so far as to sign a non-aggression treaty with them. But that treaty is tested immediately when a deadly new coven sweeps into town seeking to take over, along with some Bacchants from Las Vegas and a fallen angel who’s decided to snack on high school students like they were trail mix.

It’s more than Atticus can handle alone and he must enlist the trickster Coyote, the headhopping abilities of the witch Laksha Kulesekaran, and his neighbor’s illegal arsenal if he wants to keep the city safe from diabolical takeover. He must also exchange favors with his vampire attorney, Leif Helgarson, in a deal that might prove to be the worst of his long life—for Leif doesn’t want to be paid by the hour.

To defeat the mortal hexes of this new coven and keep his apprentice—and his city—safe, Atticus must think fast, make promises, keep his sword handy, and hope he’ll survive to fight another day.