Kings of the North (Hardcover) 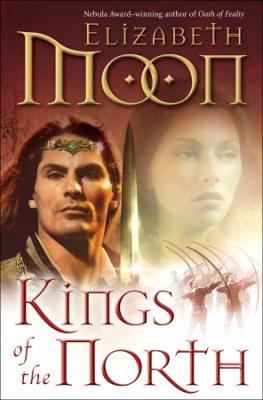 Elizabeth Moon returns to the fantasy world of the paladin Paksenarrion Dorthansdotter—Paks for short—in this second volume of a new series filled with all the bold imaginative flights, meticulous world-building, realistic military action, and deft characterization that readers have come to expect from this award-winning author. In Kings of the North, Moon is working at the very height of her storytelling powers.

Peace and order have been restored to the kingdoms of Tsaia and Lyonya, thanks to the crowning of two kings: Mikeli of Tsaia and, in Lyonya, Kieri Phelan, a mercenary captain whose royal blood and half-elven heritage are resented by elves and humans alike.

On the surface, all is hope and promise. But underneath, trouble is brewing. Mikeli cannot sit safely on his throne as long as remnants of the evil Verrakaien magelords are at large. Kieri is being hounded to marry and provide the kingdom with an heir—but that is the least of his concerns. A strange rift has developed between him and his grandmother and co-ruler, the immortal elven queen known as the Lady. More problematic is the ex-pirate Alured, who schemes to seize Kieri’s throne for himself—and Mikeli’s, too, while he’s at it. Meanwhile, to the north, the aggressive kingdom of Pargun seems poised to invade.

Now, as war threatens to erupt from without and within, the two kings are dangerously divided. Old alliances and the bonds of friendship are about to be tested as never before. And a shocking discovery will change everything.

Former Marine Elizabeth Moon is the author of many novels, including "Oath of Fealty, Victory Conditions, Command Decision, Engaging the Enemy, Marque and Reprisal, Trading in Danger, " the Nebula Award winner "The Speed of Dark, " and "Remnant Population, "a Hugo Award finalist. After earning a degree in history from Rice University, Moon went on to obtain a degree in biology from the University of Texas, Austin. She lives in Florence, Texas.

“A triumphant return to the fantasy world she created . . . no one writes fantasy quite like Moon.”—The Miami Herald

“Ranks alongside Andre Norton’s Witch World and Tolkien’s Middle-earth for invention, deeds of valor, and battles of good against evil.”—Jack Campbell

“Oath of Fealty is the best kind of fantasy: familiar but complex, with substance behind the accomplished style.”—Contra Costa Times