The Mystic Arts of Erasing All Signs of Death: A Novel (Paperback) 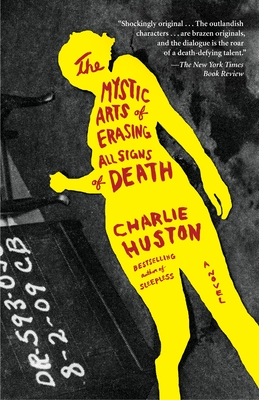 With his teaching career derailed by tragedy and his slacker days numbered, Webster Fillmore Goodhue makes an unlikely move and joins Clean Team, charged with tidying up L.A.'s grisly crime scenes. For Web, it's a steady gig, and he soon finds himself sponging a Malibu suicide's brains from a bathroom mirror and flirting with the man's bereaved and beautiful daughter.

Then things get weird: The dead man's daughter asks a favor. Every cell in Web's brain tells him to turn her down, but something makes him hit the Harbor Freeway at midnight to help her however he can. Soon enough it's Web who needs the help when gun-toting California cowboys start showing up on his doorstep. What's the deal? Is it something to do with what he cleaned up in that motel room in Carson? Or is it all about the brewing war between rival trauma cleaners? Web doesn't have a clue, but he'll need to get one if he's going to keep from getting his face kicked in. Again. And again. And again.

Charlie Huston is the author of The Shotgun Rule, the Henry Thompson trilogy: Caught Stealing, Six Bad Things (an Edgar Award nominee), and A Dangerous Man, and the Joe Pitt novels: Already Dead, No Dominion, Half the Blood of Brooklyn, and Every Last Drop. He lives in Los Angeles with his wife, the actress Virginia Louise Smith.

“There are many things to love about Charlie Huston’s fiction–he’s a brilliant storyteller, and writes the best dialogue since George V. Higgins–but what pushes my personal happy-button is his morbid sense of humor and seemingly effortless ability to create scary/funny bad guys who make Beavis and Butthead look like Rhodes Scholars. [Charlie Huston has] written several very good books, but this is the first authentically great one, a runaway freight that feels like a combination of William Burroughs and James Ellroy. Mystic Arts is, however, fiercely original–very much its own thing.”—Stephen King“Smoking-hot… scorchingly good dialogue and banner-worthy chapter headings (like “Till His Neighbors Smelled Him” and “To Keep Him From Crushing My Spine.”). And Mr. Huston, whose own brain matter is as much on display as the stuff that gets spattered here, finally delivers a book that anyone can admire. No strong stomach required.”—New York Times“Huston has outdone himself by introducing disaster-prone Web Goodhue, the star of a comic masterpiece called The Mystic Arts of Erasing All Signs of Death…Charlie Huston has for several years been one of the best-kept secrets in American fiction; this novel might move him into the mainstream. If you believe that the world is mad–a position that with each passing day becomes easier to accept–The Mystic Arts of Erasing All Signs of Death will provide welcome support for your view. The novel had me laughing out loud many times, but of course, like all the best comic fiction (Catch-22 and Portnoy's Complaint come to mind), at bottom it is deadly serious. Life is violent, messy and all too short, and laughter is the best revenge.”—Washington Post“Just when you think you’ve caught up with him on the curve, Charlie Huston drives right off the cliff, landing on a road no one else could see…Shockingly original…The outlandish characters are brazen originals, and the dialogue is the roar of a death-defying talent.”—New York Times Book Review “A witty and amusing dark tale of friendship and family and all the problems that come with both. Web is a likeable character in spite of his personality disorder, one that the reader wants to see come out on top, which makes the book that much more fun to read.”—bookbitch.com “Though most of the characters have all the noir subtlety of Sin City, this hard-shelled novel has a soft, sweet centre. Searching for a measure of healing and to repair the damage done them by their parents and the world, the good characters struggle toward redemption. [Huston] has found a way to cast a whole new generation into the noir genre and that can only be a good thing for its future.”—reviewingtheevidence.com “Genre writers too often set the hook quickly and hard, glossing over the subtleties of character in their haste to reel in the reader, ultimately using plot as a club. Not so Huston…The Mystic Arts of Erasing All Signs of Death is as darkly funny as it is graceful, not necessarily what you'd expect given that it's a novel about a guy whose livelihood involves mopping up blood and bone fragments…If one tends to find humor in unlikely places, Huston has created a work that is sly, twisted and surprising–one well worth the investment of time.”—Denver Post“Huston's novels are among the most imaginative and compelling in the mystery and thriller genres…In The Mystic Arts of Erasing All Signs of Death, Huston finds pathos and the sublime in a story about an occupation for which there is no training or career path.”—Pittsburgh Tribune“It's a pretty neat trick to avert your eyes while you read, but The Mystic Arts of Erasing All Signs of Death by Charlie Huston is so fresh, funny and original that I managed …The characters range from the slightly odd to the bizarre-doesn't-even-begin. You might feel ashamed of yourself for laughing, but I won't tell. Just take a bath afterward, and remember to scrub out the tub.”—Cleveland Plain Dealer“Hilarious, with the comedy getting darker and funnier as Web falls ever deeper into an intricate, overpowering mess that even he may not be able to clean up. Huston's characters are mostly loons, but his way with characterization and plot are so sure-handed and appealing, you'll find yourself desperately hoping they survive to live another day and star in a sequel, Clorox at the ready.”—Dallas Morning News