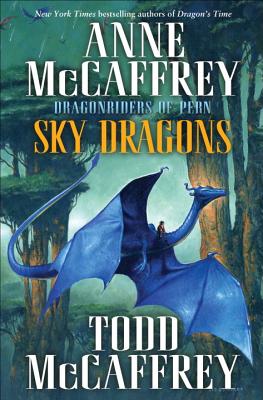 From the New York Times bestselling mother-and-son team of Anne McCaffrey and Todd McCaffrey comes the final installment in the riveting Pern saga that began with Todd’s solo novel, Dragonsblood. Now, with all of Pern imperiled by the aftereffects of a plague that killed scores of dragons and left the planet helpless against the fall of deadly Thread, the only hope for the future lies in the past.

There, on an unexplored island, a group of dragonriders led by Xhinna, a brave young woman who rides the blue dragon Tazith, must battle lethal Merows and voracious tunnel-snakes to build a safe home for themselves and the dragons, whose offspring will one day—if they survive—replenish Pern’s decimated dragon population. But as the first female rider of a blue dragon, and the first female Weyrleader in the history of Pern, Xhinna faces an uphill battle in winning the respect and loyalty of her peers . . . especially after an unforeseen tragedy leaves the struggling colony reeling from a shattering loss.

Amid the grieving, one girl, Jirana, blessed—or cursed—with the ability to foresee potential futures, will help Xhinna find a way forward. The answer lies in time . . . or, rather, in timing it: the awesome ability of the dragons to travel through time itself. But that power comes with risks, and by venturing further into the past, Xhinna may be jeopardizing the very future she has sworn to save.

Anne McCaffrey, one of the world's most popular authors, is best known for her Dragonriders of Pern(R) series. She was the first woman to win the top two prizes for science fiction writing, the Hugo and the Nebula awards. She was also given the American Library Association's Margaret A. Edwards Award for Lifetime Literary Achievement in Young Adult Fiction, was inducted into the Science Fiction Hall of Fame, and was named a Science Fiction Writers of America Nebula Grand Master. Born in Cambridge, Massachusetts, in 1926, McCaffrey relocated to Ireland in the 1970s, where she lived in a house of her own design, named Dragonhold-Underhill. She died in 2011.

Todd McCaffrey is the bestselling author of the Pern novels "Dragonsblood, Dragonheart, "and "Dragongirl, "and the co-author, with his mother, Anne McCaffrey, of "Dragon's Time, Dragon's Kin, Dragon's Fire, "and" Dragon Harper." A computer engineer, he currently lives in Los Angeles. Having grown up in Ireland with the epic of the Dragonriders of Pern, (R) he is bursting with ideas for new stories of that world, its people, and its dragons.