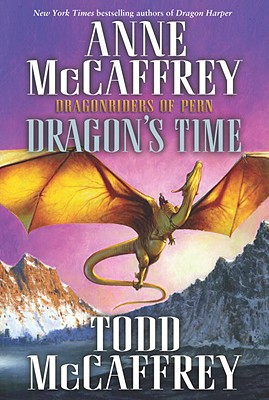 For the first time in more than three years, bestselling authors Anne McCaffrey and Todd McCaffrey, mother and son, have teamed up again to do what they do best: add a fresh chapter to the most beloved science fiction series of all time, the Dragonriders of Pern.

Even though Lorana cured the plague that was killing the dragons of Pern, sacrificing her queen dragon in the process, the effects of the disease were so devastating that there are no longer enough dragons available to fight the fall of deadly Thread. And as the situation grows more dire, a pregnant Lorana decides that she must take drastic steps in the quest for help.

Meanwhile, back at Telgar Weyr, Weyrwoman Fiona, herself pregnant, and the harper Kindan must somehow keep morale from fading altogether in the face of the steadily mounting losses of dragons and their riders. But time weighs heavily against them—until Lorana finds a way to use time itself in their favor.

It’s a plan fraught with risk, however. For attempting time travel means tampering with the natural laws of the universe, which could drastically alter history—and destiny—forever. Or so it has always been thought. But Lorana discovers that if the laws of time can’t be broken without consequences, it may still be possible to bend them. To ensure the future of Pern, she’s willing to take the fateful chance—even if it demands another, even greater, sacrifice.

Anne McCaffrey, the Hugo Award-winning author of the bestselling Dragonriders of Pern(R) novels, is one of science fiction's most popular authors. She recently collaborated with Elizabeth Ann Scarborough on the Tale of the Barque Cats books: "Catalyst" and "Catacombs." She lives in a house of her own design, Dragonhold-Underhill, in County Wicklow, Ireland.

Todd McCaffrey is the bestselling author of the Pern novels "Dragonsblood, Dragonheart, "and "Dragongirl," and the co-author, with his mother, Anne McCaffrey, of "Dragon's Kin, Dragon's Fire, " and "Dragon Harper." A computer engineer, he currently lives in Los Angeles. Having grown up in Ireland with the epic of the Dragonriders of Pern, (R) he is bursting with ideas for new stories of that world, its people, and its dragons.

“Personable characters and superb storytelling make this an excellent choice. . . . Essential for Pern fans of all ages.”—Library Journal (starred review)