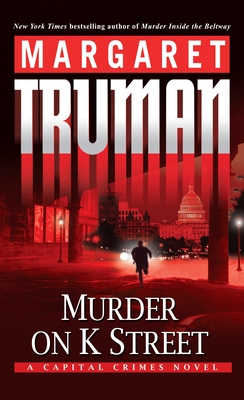 This is book number 23 in the Capital Crimes series.

Nobody knows the crooked turns, slippery slopes, and dark, dangerous stretches of the Beltway better than Margaret Truman, dean of the Washington, D.C., mystery scene. And no one is better equipped to lead a suspenseful tour into the treacherous territory of big-time political lobbying, where the right information and enough influence can buy power–the kind that corrupts . . . and sometimes kills.

Arriving home from a fund-raising dinner, senior Illinois senator Lyle Simmons discovers his wife’s brutally bludgeoned body. And like any savvy politician with presidential aspirations, his first move is to phone his attorney. In this case, it’s his old friend and college roommate, former DA Philip Rotondi, who gamely agrees to step out of quiet retirement and into the thick of a D.C.-style political, criminal, and public relations maelstrom from which no one will escape unscathed.

The crime scene is barely cold when the senator’s estranged daughter arrives hurling shocking allegations of murder at her father, despite a roomful of well-heeled witnesses who can provide Simmons with an alibi. Meanwhile, D.C.’s rumor mills and spin machines shift into high gear as speculation swirls around a tabloid- and TV-ready prime suspect: Jonell Marbury, a dashing lawyer turned lobbyist at a powerful K Street firm–and the last person to see the victim alive. But Rotondi harbors his own unsettling suspicions.

And after a second woman is killed, he discovers that a long-buried secret from his past may hold the key to cracking the case.

Aided by sleuthing ex-attorneys Mac and Annabel Smith, Rotondi reawakens the prosecutorial skills that served him so well in his gang-busting days, following the stench of dirty money and dirtier tricks across the country and across the thresholds of back rooms and front offices alike–where doing the right thing is for fools and taking on the system is a dead man’s gambit.

Murder at the Opera

“Bestseller Truman’s twenty-second D.C. mystery [is] one of her strongest. . . . [She] widens her scope to reveal a charming supporting cast. . . . Glimpses of intelligence gathering in the Middle East lend a timely feel.”
–Publishers Weekly

“Dead-on descriptions of Washington’s most crack-ridden streets and exclusionary shindigs . . . Readers who enjoy travelogue, gossip, and social commentary in their whodunits will enjoy Murder at Ford’s Theatre.”
–USA Today