Murder at the Opera: A Capital Crimes Novel (Mass Market) 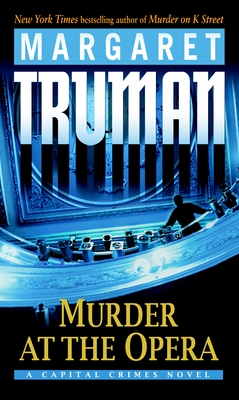 This is book number 22 in the Capital Crimes series.

Margaret Truman, who knows where all the bodies are buried inside the Beltway, has written her most thrilling novel of suspense yet. Murder at the Opera features the popular crime-fighting couple Mac Smith and his wife, Annabel Reed-Smith, as they navigate the glitz, glamour, and grime that is Washington, D.C.

It ain’t over till the fat lady sings . . . but the show hasn’t even started yet when a diva is found dead. The soprano in question, a petite young Asian Canadian named Charise Lee, was scarcely a star at the Washington National Opera. But when the aspiring singer is stabbed in the heart backstage during rehearsals, she suddenly takes center stage.

Georgetown law professor Mac Smith thought he’d just be carrying a rapier in Tosca as a favor for his beloved Annabel, but now they’re both being pressured by the panicked theater board to unmask a killer. Providing accompaniment will be former homicide detective, current P.I., and eternal opera fan Raymond Pawkins.

Soon the Smiths find themselves dangerously improvising among an expanding cast of suspects with all sorts of scores to settle. What they uncover is an increasingly complex case reaching far beyond Washington to a dark world of informers and terror alerts in Iraq, and climaxing on a fateful night at the opera attended by none other than the President himself.

“Dead-on descriptions of Washington’s most crack-ridden streets and exclusionary shindigs . . . Readers who enjoy travelogue, gossip, and social commentary in their whodunits will enjoy Murder at Ford’s Theatre.”
–USA Today