A Practical Guide to Conquering the World (Paperback) 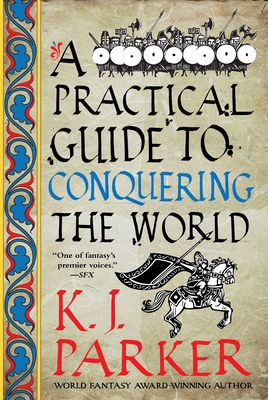 A Practical Guide to Conquering the World can be read by itself, but for those who like endings it can also be considered the refreshingly pragmatic conclusion to World Fantasy Award-winning author K.J. Parker’s acclaimed sequence of novels that began with Sixteen Ways to Defend a Walled City and continue with How to Rule an Empire and Get Away with It.

"Full of invention and ingenuity . . . Great fun." — SFX
This is the true story of Aemilius Felix Boioannes the younger, the intended and unintended consequences of his life, the bad stuff he did on purpose, and the good stuff that happened in spite of him.

It is, in other words, the tale of a war to end all wars, and the man responsible.

K.J. Parker is a pseudonym for Tom Holt. He was born in London in 1961. At Oxford he studied bar billiards, ancient Greek agriculture and the care and feeding of small, temperamental Japanese motorcycle engines; interests which led him, perhaps inevitably, to qualify as a solicitor and emigrate to Somerset, where he specialized in death and taxes for seven years before going straight in 1995. He lives in Chard, Somerset, with his wife and daughter.

"Parker fills his well-designed fantasy world with vastly differing cultures and languages that are just as fun to read about as Felix’s audacious schemes. Readers will be delighted."—Publishers Weekly

"This entertaining novel about scheming and storytelling is perfect for fans of Tyrion Lannister ... Readers will appreciate the novel’s references to real historical events and empires, its detailed world building, and most of all, Felix’s dry wit."
—Booklist

"Readers are ensured a good time and a barrel of laughs to boot."—Publishers Weekly on How to Rule an Empire and Get Away With It

"Parker's latest epic fantasy proves that all the world is, indeed, a stage, and Parker himself is a master impresario. Readers will enjoy his comedic take on how politics are comprised of equal parts lies, incompetence, and the foolishness of humanity-with just enough flashes of brilliance to save the day. Recommended for fans of Terry Pratchett."—Library Journal on How to Rule an Empire and Get Away With It

“Truly, this IS the performance of a lifetime.”—FanFiAddict on How to Rule an Empire and Get Away With It

“An impressive work of fiction. Like all Parker books I have read, Empire is an interesting experience from start to finish – funny and fresh from page one.”—The Quill to Live on How to Rule an Empire and Get Away With It

“Parker has created a world full of wit, ingenuity, unlikely tactics and reluctant heroes and there is nothing else quite like it.” —Fantasy Hive on How to Rule an Empire and Get Away With It

"Full of invention and ingenuity . . . Great fun."—SFX on Sixteen Ways to Defend a Walled City

"Launches a witty adventure series . . . Readers will appreciate the infusion of humor and fun-loving characters into this vivid and sometimes grim fantasy world."—Publishers Weekly on Sixteen Ways to Defend a Walled City

"As with most of Parker's work, there is a mel­ancholy undercurrent that gives the humor weight. As heroes go, Orhan is a reluctant and flawed one . . . . [but] when Orhan works the problem, we can't help but watch."—Locus on Sixteen Ways to Defend a Walled City