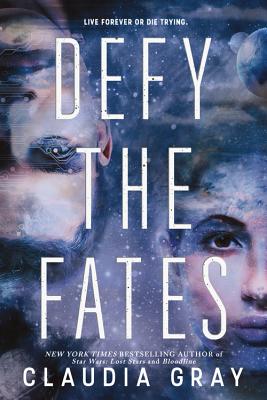 The stunning finale to the Defy the Stars trilogy from the New York Times bestselling author of Star Wars: Lost Stars and Bloodline.

Abel only has one mission left that matters: save the life of Noemi Vidal. To do that, he not only has to escape the Genesis authorities, he also must face the one person in the galaxy who still has the means to destroy him. Burton Mansfield's consciousness lives on, desperate for a home, and Abel's own body is his last bargaining chip.

Alone in the universe.

Brought back from the brink of death, Noemi Vidal finds Abel has not only saved her life, but he's made her into something else, something more. Not quite mech, yet not quite human any longer, Noemi must find her place in a universe where she is utterly unique, all while trying to create a world where anyone--even a mech--can be free.

The final battle between Earth and the colony planets is here, and there's no lengths to which Earth won't go to preserve its domination over all humanity. But together, the universe's most advanced mech and its first human-mech hybrid might have the power to change the galaxy for good.

Claudia Gray is the New York Times bestselling author of many science fiction and paranormal fantasy books for young adults, including the Defy the Stars series, the Firebird series, the Evernight series, the Spellcaster series, and Fateful. She's also had a chance to work in a galaxy far, far away as the author of the Star Wars novels Lost Stars,Bloodline, and Leia, Princess of Alderaan. Born a fangirl, she loves obsessing over geeky movies and TV shows, as well as reading and occasionally writing fanfiction; however, she periodically leaves the house to go kayaking, do a little hiking, or travel the world. She will take your Jane Austen trivia challenge any day, anytime. Currently she lives in New Orleans.

Praise for Defy the Worlds:
"The action raises the stakes, for individuals and entire worlds, and the romance satisfies without overwhelming, right up to a huge cliffhanger ending. A fast, fun follow-up."—Kirkus Reviews

"The taut writing, engaging characters, unique universe, abundant plot twists, and a cliff-hanger finale in this sequel will keep readers on the edge of their seats and wanting more...A must-read."
—SLJ

*"Poignant and profound...a tale that examines the ethics of war and tackles questions of consciousness, love, and free will. Gray's characters are nuanced, her worldbuilding is intelligent, and the book's conclusion thrills and satisfies while defying expectations."
—Publishers Weekly (starred review)

"With a love story that sweeps across the galaxy and a heart-racing high-action plot, Defy the Stars brilliantly explores what it means to be human. This book shines like the stars."—Beth Revis, New York Times bestselling author of the Across the Universe series

"Startlingly original and achingly romantic, Abel and Noemi's adventure will linger in my imagination--and my heart--for aeons. Defy the Stars is nothing short of masterful."—Kass Morgan, New York Times bestselling author of The 100 series

"A must-buy for sci-fi readers."
—SLJ