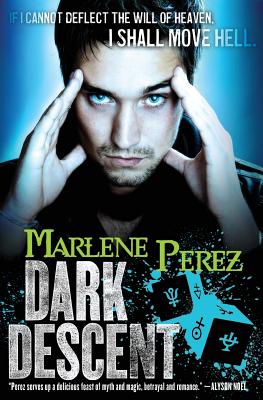 This is book number 2 in the Nyx Fortuna series.

The second in a line of three exciting new urban fantasy novels where the son of the Fates must travel to the underworld...

Nyx Fortuna, still reeling from Elizabeth's betrayal, has no time to rest. His cousin Claire has gone missing and his aunts, the three Fates, are threatening that if he doesn't find her, Elizabeth will suffer.

Now, despite how he may feel, Nyx must venture into the underworld of Minneapolis to find his wayward cousin, lost to the thrall of Hecate's dark magic. But releasing Claire is not without its consequences. While it might fulfill the prophecy foretelling the fall of the Fates that have plagued him for so long, it would also mean releasing Hecate from her dark prison. . . and into our world. Nyx now must decide. How far would he go to save the woman he loves. . . the woman who betrayed him?

Marlene Perez is the author of paranormal and urban fantasy books, including the best-selling Dead is series for teens. The first book in the series, Dead is the New Black, was named an ALA Quick Pick for Reluctant Young Adult Readers as well as an ALA Popular Paperback. Dead is Just a Rumor was on VOYA's 2011 Best Science Fiction, Horror, & Fantasy List. Her novels have been featured in Girl's Life, Seventeen, and Cosmopolitan, and Disney Television has optioned the rights to the first three books in the Dead is series.

She grew up in Story City, Iowa and is the youngest of twelve children. She lives in Orange County, California with her husband and children. Visit Marlene at www.marleneperez.com or at the Welcome to Nightshade Facebook Community Page at http://www.facebook.com/#!/pages/Welcome-to-Nightshade-DEAD-IS.

"An intriguing protagonist, snappy dialogue, and a fast-paced plot."—Publisher's Weekly on Strange Fates