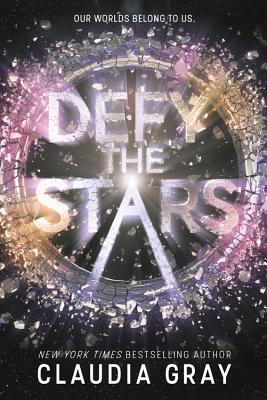 By Claudia Gray
Email or call for price.
Hard to Find

From the New York Times bestselling author of Star Wars: Lost Stars and Bloodline comes a thrilling sci-fi adventure that Kass Morgan, bestselling author of The 100 series, calls "startlingly original and achingly romantic...nothing short of masterful."
She's a soldier--Noemi Vidal is willing to risk anything to protect her planet, Genesis, including her own life. To their enemies on Earth, she's a rebel.
He's a machine--Abandoned in space for years, utterly alone, Abel's advanced programming has begun to evolve. He wants only to protect his creator, and to be free. To the people of Genesis, he's an abomination.
Noemi and Abel are enemies in an interstellar war, forced by chance to work together as they embark on a daring journey through the stars. Their efforts would end the fighting for good, but they're not without sacrifice. The stakes are even higher than either of them first realized, and the more time they spend together, the more they're forced to question everything they'd been taught was true.
An epic and romantic adventure, perfect for fans of The Lunar Chronicles and Illuminae.

Claudia Gray is the New York Times bestselling author of many science fiction and paranormal fantasy books for young adults, including Defy the Stars, Defy the Worlds, the Firebird series, the Evernight series, the Spellcaster series, and Fateful. She's also had a chance to work in a galaxy far, far away as the author of the Star Wars novels Lost Stars, Bloodline, and Leia, Princess of Alderaan. Born a fangirl, she loves obsessing over geeky movies and TV shows, as well as reading and occasionally writing fanfiction; however, she periodically leaves the house to go kayaking, do a little hiking, or travel the world. She will take your Jane Austen trivia challenge any day, anytime. Currently she lives in New Orleans.

*"Poignant and profound...a tale that examines the ethics of war and tackles questions of consciousness, love, and free will. Gray's characters are nuanced, her worldbuilding is intelligent, and the book's conclusion thrills and satisfies while defying expectations."—Publishers Weekly (starred review)

"Replete with rebels, bots, and battles, this top-notch space adventure features a well-developed plot and an unexpected, satisfying ending. This is a complex and well-told tale about loyalty, love, and the meaning of life. A must-buy for sci-fi readers."—School Library Journal

"Defy the Stars is a unique and masterful sci-fi space opera that will take readers across the galaxy on a fast-paced thrill ride...Brilliantly done, the book explores what it means to be human."—Romantic Times

"The story plays with themes of destiny, honor, and faith, while ultimately asking readers to consider what makes one human. Recommend to fans of The Lunar Chronicles and The Illuminae Files, or to romance readers wanting a sci-fi entry point."—School Library Connection

"This first-rate STEM-packed adventure explores what it means to be human and whether people are truly their brothers' keepers."—Booklist

"With a love story that sweeps across the galaxy and a heart-racing high-action plot, Defy the Stars brilliantly explores what it means to be human. This book shines like the stars."—Beth Revis, New York Times bestselling author of the Across the Universe series

"Startlingly original and achingly romantic, Abel and Noemi's adventure will linger in my imagination--and my heart--for eons. Defy the Stars is nothing short of masterful."—Kass Morgan, New York Times bestselling author of The 100 series