The Book of Gothel (Paperback) 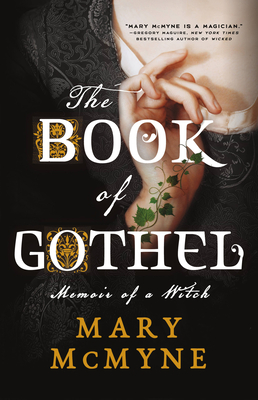 The Book of Gothel is a clever, captivating retelling of Rapunzel. Haelewise is a young healer, shunned by her village for her mother's beliefs in the old ways. When her mother dies, Haelewise soon finds herself on a journey to learn from the wise woman of mysterious and magical Gothel tower. As Haelewise's story unfolds, the reader is swept away in the rich medieval setting and fairy tale magic. Full of complex characters and intricate writing, The Book of Gothel is a beautifully told story of the power of healing that is perfect for fans of Wicked and Circe.

Everyone knows the story of Rapunzel in her tower, but do you know the story of the witch who put her there? Mary McMyne’s spellbinding debut reveals the truth behind the fairy tale—the truth they never wanted you to know, as only a witch might tell it.

"Smart, swift, sure-footed and fleet-winged, The Book of Gothel launches its magic from a most reliable source: the troubled heart. Mary McMyne is a magician."—Gregory Maguire, NYT bestselling author of Wicked

Germany, 1156. With her strange black eyes and even stranger fainting spells, young Haelewise has never quite fit in. Shunned by her village, her only solace lies in the stories her mother tells of child-stealing witches, of princes in wolf-skins, and of an ancient tower cloaked in mist, where women will find shelter if they are brave enough to seek it.

When her mother dies, Haelewise is left unmoored. With nothing left for her in her village, she sets out to find the legendary tower her mother spoke of—a place called Gothel, where she meets a wise woman willing to take Haelewise under her wing. There, she discovers that magic is found not only in the realm of fairy tales.

But Haelewise is not the only woman to seek refuge at Gothel. It’s also a haven for a girl named Rika, who carries with her a secret the church strives to keep hidden. A secret that reveals a dark world of ancient spells and murderous nobles, behind the world Haelewise has always known.

Told from the witch's own perspective, The Book of Gothel is a lush, historical retelling filled with dark magic, crumbling towers, mysterious woods, and evil princes. This is the truth no one ever wanted you to know, as only a witch might tell it.

"Smart, swift, sure-footed and fleet-winged, The Book of Gothel launches its magic from a most reliable source: the troubled heart. Mary McMyne is a magician. Her take on the Rapunzel tale glows like a cloisonné gem set against a fist of dark soapstone."—Gregory Maguire, NYT bestselling author of Wicked

"Heartfelt and vividly imagined, this intriguing backstory to a classic fairy tale lifts the curtain on a medieval world where women battle to keep magic alive."—Emily Croy Barker, author of The Thinking Woman's Guide to Real Magic

"Fable and history rhyme in McMyne's captivating vision of a medieval past steeped in women's magic and bound by women's love."—Jordanna Max Brodsky, author of The Immortals and The Wolf in the Whale

"The Book of Gothel is wonderfully rich with historical detail, and sparkles with the intermingled magic of gods and goddesses, seers and wisewomen. Haelewise is a memorable heroine, worthy of legend. Readers will see the story of Rapunzel in a new and refreshing light."—Louisa Morgan, author of A Secret History of Witches

"An inventive retelling of a classic tale that pulls you deep into the wild woods of medieval Germany. The Book of Gothel is a spell-binding debut."—Signe Pike, author of The Forgotten Kingdom

“Both gently and fiercely told, The Book of Gothel is a sweeping, sharp story of how history twists into fairytale and back again.”

—Hannah Whitten, NYT bestselling author of For The Wolf

"Mary McMyne's The Book of Gothel is a gut-punch of a fantasy novel - I found myself completely enraptured by this story within a story, and even more taken by the end, which I totally didn't see coming. Gothel feels both familiar and like a completely original fairy tale, and I was moved by the Jewish representation. This is Rapunzel like you've never seen her before." —Rena Rossner, author of The Sisters of the Winter Wood

“The Book of Gothel delivers an intelligent spin on a well-loved fairy tale, the rich historical detail deftly woven with folktale magic and thoughtful characterization.”—Rowenna Miller, author of Torn

“Certain stories endure because of their beauty, wonder, and wisdom. The Book of Gothel is such a novel—one that will hold readers in delighted thrall right to the startling end.”—Ronlyn Domingue, author of The Mercy of Thin Air and the Keeper of Tales Trilogy

“This is the fairy tale retelling I never knew I needed. Rooted in history, THE BOOK OF GOTHEL highlights the relationships between women and the ways in which we both help and hinder each other in the name of love and loyalty. Haelewise will be in my heart for a very long time.”—Genevieve Gornichec, author of The Witch's Heart

"McMyne’s shimmering debut gives a fresh, exciting backstory to one of the most famous villains in fairy tale lore: the witch who put Rapunzel in her tower.... The result is a sprawling epic, full of magic, love, and heartbreak. Fans of Circe and The Wolf and the Woodsman will devour this taut, empowering fairy tale."—Publishers Weekly

"McMyne’s debut is a reinvention of the Rapunzel fairy tale, a luscious origin story from the witch’s point of view.... McMyne melds folklore with actual historical figures and cleverly bookends the narrative with opening and closing chapters set in the twenty-first century."—Booklist

"Mary McMyne's debut novel is dark and moody...This atmosphere, combined with the deep longings and confusion of a girl just entering womanhood and the fact that readers have a good idea of the fate that awaits her, shadows The Book of Gothel with an overwhelming sense of dread—but will also compel readers to keep going to the very end."—BookPage

"I absolutely loved The Book of Gothel. It combines everything I tend to love about stories in a breathtaking manner and is very hard to put down... It is a book I highly recommend and I see myself coming back to again and again."