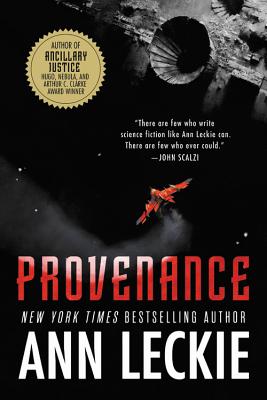 An ambitious young woman has just one chance to secure her future and reclaim her family's priceless lost artifacts in this stand-alone novel set in the world of Ann Leckie's groundbreaking, NYT bestselling Imperial Radch trilogy, which won the Hugo and Nebula awards.

Though she knows her brother holds her mother's favor, Ingrid is determined to at least be considered as heir to the family name. She hatches an audacious plan -- free a thief from a prison planet from which no one has ever returned, and use them to help steal back a priceless artifact.

But Ingray and her charge return to her home to find their planet in political turmoil, at the heart of an escalating interstellar conflict. Together, they must make a new plan to salvage Ingray's future and her world, before they are lost to her for good.

Ann Leckie is the author of the Hugo, Nebula, Arthur C. Clarke, and British Science Fiction Award-winning novel Ancillary Justice. She has worked as a waitress, a receptionist, a rodman on a land-surveying crew, and a recording engineer. She lives in St. Louis, Missouri.

"Character-centered space opera from one of SF's brightest stars."—Library Journal

"A perfect follow-up to the trilogy."—The New York Times

"The trademarks of Leckie's talent are on display, with even more worlds for readers to discover and some teasing overlap with her previous series. But what makes this book is watching Ingray overcome her poor self-esteem and discover who she actually wants to be, demonstrating again the genre's capacity to tell compelling, human stories."—RT Book Reviews

"The intricacies and oddities are a delight.... A thrill for fans of heists and capers."—Washington Post

"A careful look at how no one's immune from politics, even if they think themselves outside the fray . . . A story about the necessity of exploring the edges of the known."—NPR

"An entertaining, thoughtful, and clever entry that both Leckie's new and returning readers can delve into and enjoy."—The Los Angeles Review of Books

"[Leckie] raises provocative questions about identity, family and self-esteem. By the end, both neophytes and longtime Leckie fans are likely to be pleased."—The San Francisco Chronicle

"The trappings of widescreen sci-fi, and the attention to character, to the small moments, to the inner lives of those living through outsized events . . . Just read it."—B&N Sci-Fi and Fantasy Blog

"If you don't know the Ancillary series by now, you probably should. Ann Leckie's sociopolitical space opera almost singlehandedly breathed new cool into the stereotype of spaceships trundling through far-off systems amid laser battles. ... [Ancillary Mercy] earns the credit it's received: As a capstone to a series that shook genre expectations, as our closing installment of an immersively realized world, and as the poignant story of a ship that learned to sing."—NPR Books on Ancillary Mercy

"This trilogy will stand as a classic of SF for the ages."—Library Journal on Ancillary Mercy

"The sort of space opera audiences have been waiting for."—NPR Books on Ancillary Sword

"No science-fiction series as descriptive of our current political and cultural moment or as insistent that we open our eyes to it."—Slate on Ancillary Mercy

"A gripping read, with top-notch world building and a set of rich subtexts about human rights, colonialism -- and (yes) hive mind sex."—io9 on Ancillary Sword

"Leckie investigates what it means to be human, to be an individual and to live in a civilized society."—Scientific American on Ancillary Sword