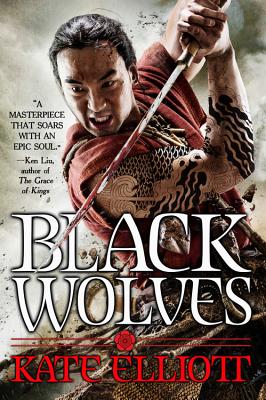 An exiled captain returns to help the son of the king who died under his protection in this rich and multi-layered first book in an action-packed new series.

Twenty two years have passed since Kellas, once Captain of the legendary Black Wolves, lost his King and with him his honor. With the King murdered and the Black Wolves disbanded, Kellas lives as an exile far from the palace he once guarded with his life.

Until Marshal Dannarah, sister to the dead King, comes to him with a plea-rejoin the palace guard and save her nephew, King Jehosh, before he meets his father's fate.

Combining the best of Shogun and Vikings, Black Wolves is an unmissable treat for epic fantasy lovers everywhere.

Kate Elliott is the author of more than a dozen novels, including the Novels of the Jaran and, most recently, the Crossroads fantasy series. King's Dragon, the first novel in the Crown of Stars series, was a Nebula Award finalist; The Golden Key (with Melanie Rawn and Jennifer Roberson) was a World Fantasy Award finalist. Born in Oregon, she lives in Hawaii.

"Characters, their relationships and motivations are intricately woven, and the sympathy one feels for each is a testament to how well they are written...The reader will gasp in surprise and amazement at each revelation."
—RT Book Reviews (Top Pick!) on Black Wolves

"Sophisticated, multifaceted worldbuilding sparked by original flourishes, populated by characters we quickly come to care about ... a stellar performance."—Kirkus on The Black Wolves

"Black Wolves is a sweeping tale of loyalty and betrayal, ambition and intrigue, impelled by the mysteries that lie at its heart."—Jacqueline Carey on Black Wolves

"Intricate, fascinating worldbuilding, twisty political intrigue, vivid characters to love and hate -- this is Kate Elliott at the top of her epic fantasy game."—Karen Miller on Black Wolves

"On a vast, colorful canvas, Kate Elliott has drawn dozens of characters who act and react with poetry and grit. Lush and textured, by turns moving, exciting, playful, and contemplative, Black Wolves is a masterpiece that soars with an epic soul."—Ken Liu on Black Wolves

"The concept got me shivering. . . .the characters, the mysteries, the background history, the cultural complexity, were all so intriguing I couldn't stop reading."—Elizabeth Moon on Cold Magic

"Elliott pulls out all the stops in a wildly imaginative narrative that will ring happy bells for fans of Philip Pullman's His Dark Materials trilogy."—Publishers Weekly on Cold Magic

"Elliott has concocted something very special and original here, with elements to tweak sci-fi and fantasy fans of nearly any stripe."—New York Journal of Books on Cold Magic