Inspector of the Dead (Thomas and Emily De Quincey #2) (Paperback) 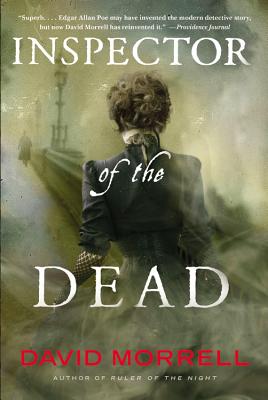 This is book number 2 in the Thomas and Emily De Quincey series.

The sequel to Murder as a Fine Art, my favorite mystery of 2013, Inspector of the Dead brings back opium-eater Thomas De Quincey, his headstrong daughter Emily and Scotland Yard detectives Ryan and Becker. Based on real attempts to assassinate Queen Victoria, in Inspector of the Dead, a serial killer is targeting the upper crust of British society. With each victim, he leaves a note naming a person who previously attempted to assassinate Queen Victoria, implying she is the ultimate target. De Quincy isn’t the most likable character, nor do the British citizens respect him. Fighting his opium addiction and poor health, he, never the less, is able to look at the murder scenes with an unbiased and unique perspective, seeing beyond the prejudices of an upper-crust society where appearances are everything. Inspector of the Dead skillfully blends fact and fiction, re-creating 1855 Victorian London’s fog shrouded streets. As always, David Morrell’s impeccable research and gifted storytelling elevates Inspector of the Dead to the pinnacle of historical thrillers.

The year is 1855. The Crimean War is raging. The incompetence of British commanders causes the fall of the English government. The Empire teeters. Amid this crisis comes opium-eater Thomas De Quincey, one of the most notorious and brilliant personalities of Victorian England. Along with his irrepressible daughter, Emily, and their Scotland Yard companions, Ryan and Becker, De Quincey finds himself confronted by an adversary who threatens the heart of the nation.

This killer targets members of the upper echelons of British society, leaving with each corpse the name of someone who previously attempted to kill Queen Victoria. The evidence indicates that the ultimate victim will be Victoria herself.

"Riveting . . . Inspector of the Dead is a masterful work."—Waka Tsunoda, Associated Press

"Superb . . . Masterful . . . Edgar Allan Poe may have invented the modern detective story, but now David Morrell has reinvented it. He's turned thriller writing into a concerto worthy of Mozart and conducts the brilliant Inspector of the Dead with perfect pitch and tone. A true maestro wielding a keyboard instead of a baton."—Jon Land, Providence Journal

"Morrell's narrative is clever and layered. . . . Psychology and back story have always figured in Morrell's considerable output of thrillers, including his landmark First Blood. In the De Quincey stories, these narrative tools seem fully mastered."—Bill Kohlhaase, Santa Fe New Mexican

"With this mesmerizing series, David Morrell doesn't just delve into the world of Victorian England--he delves into the heart of evil, pitting one man's opium-skewed brilliance against a society where appearances are everything . . . and the most vicious killers lurk closer than anyone thinks."—Lisa Gardner, author of Crash & Burn and The Perfect Husband

"Morrell weaves a true web of lies, secrets, and cunning schemes that gives readers the sense that they are actually living and breathing the air of historical England. . . . Morrell yet again shows that his character creation is second to none, and the pace will have readers losing sleep by telling themselves, 'Just one more chapter.'"—Suspense Magazine