How to Be a Supervillain (Hardcover) 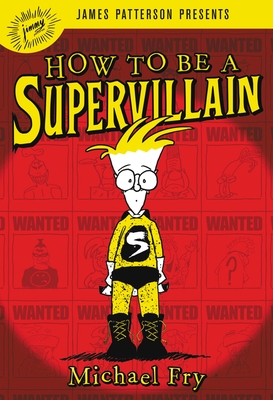 This is book number 1 in the How to Be a Supervillain series.

Victor Spoil comes from a long line of famous supervillains and he's fully expected to join their ranks one day. But to his family's utter disappointment, Victor doesn't have a single bad-guy bone in his body. He won't run with scissors, he always finishes his peas, and he can't stand to be messy. Hopeless!

As a last-ditch effort before they give up and let him be a -- gasp! -- civilian, Victor's exasperated parents send him to apprentice under a disgraced supervillain called The Smear. This matchup starts off as a complete disaster, but Victor and The Smear eventually find that they have a lot to learn from each other. When the stakes get high as Victor is forced to choose between his mentor and his family morals (or lack thereof) . . . what will the world's nicest bad guy do?

Michael Fry has been a cartoonist for over 30 years and is the co-creator and writer of the Over the Hedge comic strip, which was turned into a Dreamworks film starring Bruce Willis and William Shatner. He lives near Austin, TX.

Praise for How to Be a Supervillain:
A National Bestseller!
An IndieBound Bestseller!
A Parents' Choice Award(R) Winner!
—-

"The irreverent humor that middle graders relish will go a long way to capturing their interest. Superhero fans will enjoy this tongue-in-cheek take on the genre."
—School Library Journal

"In this clever world, Over the Hedge comic-strip author Fry achieves an ideal balance of humor, poignancy, and zippy superhero/bad guy action, punctuated with frequent amusing black and white illustrations."—Bulletin of the Center for Children's Books

"Fry has written a hilarious story about an unlikely hero and masterfully incorporates the illustrations into the narrative. Victor's story is sure to be a hit among reluctant readers and fans of illustrated novels."
—Booklist

"Being bad at being bad has never been such good fun!"
—Chris Grabenstein, NYT Bestselling author of Escape from Mr. Lemoncello's Library

"Part novel, part comic, Michael Fry's humor shines in Victor Spoil's journey to discovering his true self!"
—Dan Santat, Caldecott-medal-winning author of The Adventures of Beekle and illustrator of the Mighty Robot series with Dav Pilkey