After the Crown (The Indranan War #2) (Paperback) 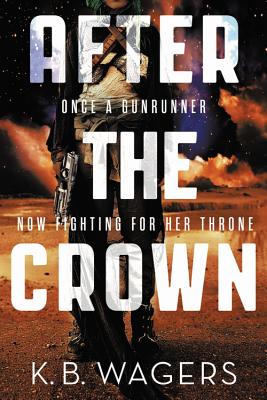 This is book number 2 in the The Indranan War series.

The adrenaline-fueled, Star Wars-style sequel to Behind the Throne, a new space adventure series from author K.B. Wagers.

Former gunrunner-turned-Empress Hail Bristol was dragged back to her home planet to fill her rightful position in the palace. With her sisters and parents murdered, the Indranan empire is on the brink of war. Hail must quickly make alliances with nearby worlds if she has any hope of surviving her rule.

When peace talks turn violent and Hail realizes she's been betrayed, she must rely on her old gunrunning ways to get out of trouble. With help from an old boss and some surprising new allies, she must risk everything to save her world.

A hell of a ride... it has an exuberance, an utter delight in putting its space opera operatics right into your face that makes it just about entirely wonderful as an example of the genre: I enjoyed the hell out of it, and I'm really looking forward to seeing what comes next.—Tor.com on After the Crown

"'Crown' is fastpaced, and its focus on a female action heroine defined by her decisions rather than romance is refreshing and fun."—The Washington Post on After the Crown

"Two books in, this series has exemplified political plotting as compelling as the badass heroine at its center."—The B&N Sci-Fi & Fantasy Blog on After the Crown

Craving a galactic adventure? K.B. Wagers' second Indranan War novel is just the ticket.—Bookish on After the Crown

"Interesting multilayered space opera and court intrigue... for fans of shows like Firefly and Killjoys."—Pop Culture Beast on After the Crown

"Full of fast-paced action and brutal palace intrigue, starring the fiercest princess this side of Westeros."—B&N.com on Behind the Throne

"Taut suspense, strong characterization, and dark, rapid-fire humor are the highlights of this excellent SF adventure debut."—Publishers Weekly (starred review) on Behind the Throne

"This debut ranks among the best political SF novels in years, largely because of the indomitable, prickly Hail ... fast-paced, twisty space opera."—Library Journal (starred review) on Behind the Throne

"A darn good space adventure yarn. It takes the best of the smugglers' corner of the Star Wars universe and adds political intrigue and family drama."—Tor.com on Behind the Throne

"Promising science-fiction series ... for fans of stories with plenty of action and political maneuvering."—Booklist on Behind the Throne