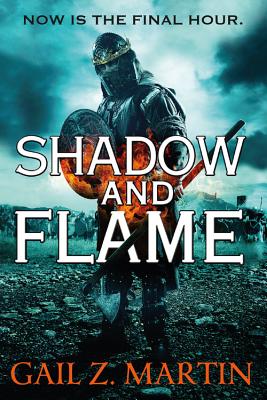 This is book number 4 in the The Ascendant Kingdoms Saga series.

From Gail Z. Martin, one of the most exciting authors of fantasy adventure writing “epic fantasy at its best”, comes the fourth and final novel in the epic Ascendant Kingdoms Saga (Aaron Rosenberg).

Blaine McFadden and his allies have brought magic back under mortal command and begun to restore order to the beleaguered kingdom of Donderath. Now, new perils and old enemies gather.

Foreign invaders, a legendary dark mage and vengeful immortals fight Blaine's battered forces for control of the continent, and Blaine's weary army is the only thing standing between a kingdom struggling to rise from the ashes and a descent into fury and darkness.

This is the final reckoning.

"Epic fantasy as it was meant to be read: gripping, action packed, and larger than life. A delight for any fan of the genre!" —Rachel Aaron on War of Shadows

Gail Z. Martin discovered her passion for SF/fantasy in elementary school. The first story she wrote -- at age five -- was about a vampire. Her favorite TV show as a preschooler was Dark Shadows. At age fourteen she decided to become a writer. She enjoys attending SF/Fantasy conventions, Renaissance fairs and living history sites. She is married and has three children, a Himalayan cat and a golden retriever.

"War of Shadows is a rousing adventure full of action, intrigue, danger, and suspense. It's epic fantasy at its best, filled with vivid magic but grounded by real human emotion."—Aaron Rosenberg, author of the bestselling Adventures of DuckBob Spinowitz series

"This book kept me reading long past my bed time. As always, Gail Z. Martin delivers Epic Fantasy as it was meant to be read: gripping, action packed, and larger than life. A delight for any fan of the genre!"—Rachel Aaron, author of The Spirit Thief on War of Shadows

"A vivid, engrossing tapestry woven from epic heroism, post apocalypse struggles, perilous magic and darkest fantasy. A distinct and distinctive achievement."—Juliet McKenna, author of The Tales of Einarinn on War of Shadows

"Which of these things are on your epic fantasy checklist: Intense action in the first few pages which then carries right through to the last? Vivid battle scenes? Characters that combine the best of classic archetypes with fresh new twists? Snappy dialogue? Exciting world building? If you've checked even half of these items, then you owe it to yourself to check out Gail Z. Martin's War of Shadows. It's heroic adventure at it's rollicking finest."—Charles E. Gannon, author of Fire With Fire

"With a large cast of satisfying characters, Gail Z. Martin masterfully presents an epic struggle between the forces of life and the forces of death in a world of broken magic."—James Maxey, author of Greatshadow

"There's plenty of action and plot embroidery, and the pages turn easily."—Kirkus on Ice Forged

"The immediate action in this story pulls the reader in... And with more than a few unexpected twists, this easy-to-follow storyline will leave the reader completely surprised and ready for the next book in the saga."—RT Book Reviews on Ice Forged