The Rising (The Alchemy Wars #2) (Paperback) 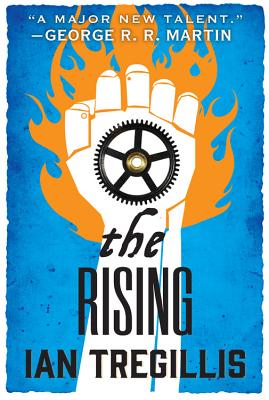 This is book number 2 in the The Alchemy Wars series.

The second book in the Alchemy Wars trilogy by Ian Tregillis, an epic tale of liberation and war.

Jax, a rogue Clakker, has wreaked havoc upon the Clockmakers' Guild by destroying the Grand Forge. Reborn in the flames, he must begin his life as a free Clakker, but liberation proves its own burden.

Berenice, formerly the legendary spymaster of New France, mastermind behind her nation's attempts to undermine the Dutch Hegemony -- has been banished from her homeland and captured by the Clockmakers Guild's draconian secret police force.

Meanwhile, Captain Hugo Longchamp is faced with rallying the beleaguered and untested defenders of Marseilles-in-the-West for the inevitable onslaught from the Brasswork Throne and its army of mechanical soldiers.

Ian Tregillis is the son of a bearded mountebank and a discredited tarot card reader. He was born and raised in Minnesota, where his parents had landed after fleeing the wrath of a Flemish prince. (The full story, he's told, involves a Dutch tramp steamer and a stolen horse.) Nowadays he lives in New Mexico, where he consorts with writers, scientists and other unsavoury types.

"There are a number of marvelous action scenes, hallucinogenic in their over-the-top big-screen violence, but the real attraction here is Tregilli's narrative ruthlessness, which manifest as willingness to take his character to the brink of hell...and then, rather than yank them back at the last second, push them in."—SciFi Magazine on The Mechanical

"Superb alternate history filled with clockwork men and ethical questions on the nature of free will. ... Tregillis's complex setting is elegantly delivered, and the rich characters and gripping story really make this tale soar."—Publishers Weekly on The Mechanical

"The first thing readers will say after finishing this splendid book is: 'Wow.' The second thing will probably be: 'When can I read the next one?'"—Booklist on The Mechanical

"Tregillis presents a fascinating look at the nature of free will and the existence of the soul, wrapped up in an absolutely thrilling adventure story. Jax is an amazing, sympathetic character, and the world of the clockmakers and their slaves is so absorbing that readers will be dying for the next entry in this new series."—Library Journal on The Mechanical