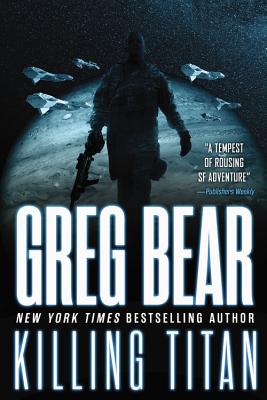 This is book number 2 in the War Dogs series.

After barely surviving his last tour on Mars, Master Sergeant Michael Venn finds himself back on earth in enforced isolation. Through a dangerous series of operations he returns to Mars to further his investigation into the Drifters -- ancient artifacts suddenly reawakened on the red planet.

But another front in the war leads his team to make the difficult journey to Saturn's moon, Titan. Here, in the cauldron of war, hides new truths about the Drifters, the origin of life in our solar system and the plans of the supposedly benevolent Gurus, who have been "sponsoring" and supporting humanity in their fight against outside invaders.

Killing Titan is the second book in the epic interstellar War Dogs trilogy from master of science fiction, Greg Bear.

"Not for those who prefer their space opera simple-minded, this beautifully written tale where nothing is as it seems will please readers with a well-developed sense of wonder."—Publisher's Weekly (starred review) on Hull Zero Three

"Greg Bear is one contemporary master of the old ways, and in Hull Zero Three he gives the generation starship theme - crystallized beautifully by Robert Heinlein in 1941's "Universe" - a vigorous makeover...."—bn.com