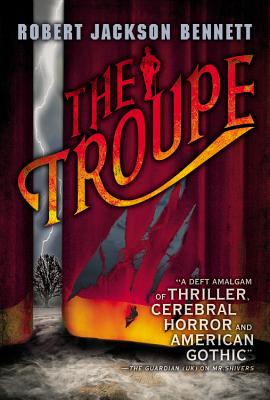 If a world existed where Neil Gaiman and Erin Morgenstern got together and made book babies, the outcome would be something akin to The Troupe by Robert Jackson Bennett. This magical and dark vaudevillian tale follows 16-year-old runaway George Carole as he searches for his father, Heironomo Silenus, leader of the infamous Silenus Troupe. When George finally finds the Troupe, the red velvet curtains are opened to reveal a backstage full of deception and bravado, where magic is real and so is the battle between good and evil. This gaslamp-lit world is filled with eerie imagery, thrills, and eccentric characters, from Franny the strong woman to Kingsley the Ventriloquist, and all those in between. This book had a little bit of everything I love. – LH

But sixteen-year-old pianist George Carole has joined vaudeville for one reason only: to find the man he suspects to be his father, the great Heironomo Silenus. Yet as he chases down his father's troupe, he begins to understand that their performances are strange even for vaudeville: for wherever they happen to tour, the very nature of the world seems to change.

Because there is a secret within Silenus's show so ancient and dangerous that it has won him many powerful enemies. And it's not until after he joins them that George realizes the troupe is not simply touring: they are running for their lives.

Robert Jackson Bennett was born in Baton Rouge, Louisiana. Winner of the Shirley Jackson Award, the Sydney J. Bounds Award, and an Edgar Award, he is the author of the novels Mr. Shivers, The Company Man, The Troupe, and American Elsewhere. Find out more about the author at www.robertjacksonbennett.com.

"Bennett's finely crafted novel rises on a wave of suspense to a place of beauty and hope."
—Publishers Weekly

"This is the kind of book that will find its ways into one's hands again and again over the years."—Booklist

"...a melancholy coming-of-age tale with a moody atmosphere... The Troupe is a genuinely powerful piece of work."—SFX

"The Troupe is true magic: a gripping tale that reminds the audience why we fell in love with reading. This book enchants, leaving the audience on their feet, yelling for an encore."—Mat Johnson, author of Pym