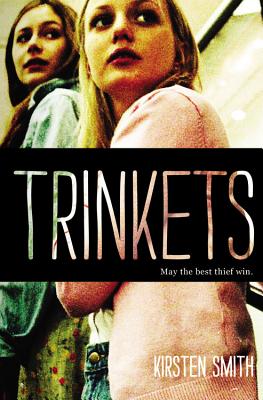 By Kirsten Smith
Unavailable to Order
Hard to Find

The Shoplifters Anonymous meetings that sixteen-year-old Moe is forced to attend are usually punctuated by the snores of an old man and the whining of the world's unhappiest housewife. Until the day that Tabitha Foster and Elodie Shaw walk in. Tabitha has just about everything she wants: money, friends, popularity, a hot boyfriend who worships her...and clearly a yen for stealing. So does Elodie, who, despite her goodie-two-shoes attitude pretty much has "klepto" written across her forehead in indelible marker. But neither of them are anything compared to Moe, a bad girl with an even worse reputation.
Tabitha, Elodie, and Moe: a beauty queen, a wallflower, and a burnout-a more unlikely trio high school has rarely seen. And yet, when Tabitha challenges them to a steal-off, so begins a strange alliance linked by the thrill of stealing and the reasons that spawn it.

Hollywood screenwriter Kirsten Smith tells this story from multiple perspectives with humor and warmth as three very different girls who are supposed to be learning the steps to recovery end up learning the rules of friendship.

Kirsten Smith first began writing poetry while attending Occidental College but has made a career out of writing screenplays. Her screenwriting and producing credits include 10 Things I Hate About You, Legally Blonde, The House Bunny, She's the Man, and Whip It. She is the author of The Geography of Girlhood and lives in Los Angeles, California.

"A just-right ending will make this a hit with fans of Sarah Dessen, Deb Caletti, Elizabeth Scott and other venerable chick-lit authors."
—Kirkus Reviews

"With different glimpses of high school life, some romance for each character, and family drama that doesn't overwhelm the plot, Trinkets is a quick and entertaining read."—School Library Journal

"Chapters alternate between the voices of the three girls, giving insight into three differing yet parallel motivations for shoplifting while creating characters that readers will find appealing and sympathetic whether or not they agree with their perspectives."
—The Bulletin of the Center for Children's Books

"I want to build a shrine to this book. It explores and debunks high school clichés, and understands the language only teenage feelings speak. Its three narrators make a unique story not only exciting to experience vicariously, but relatable. It will sit on my shelf next to a My So-Called Life boxset and copies of The Virgin Suicides and Girl, Interrupted."
—Tavi Gevinson, Editor-in-Chief, Rookie

"Hilarious and wise, Trinkets brought me straight back to those hellish days of high school. I fell in love with these three girls--their individual struggles are so real and wonderfully touching."
—Anna Farris, star of The House Bunny

"I am not surprised that Kiwi Smith, once again, has written something so insightful, sensitive and, of course, funny. Trinkets is a beautiful creation. It is raw and full of heart, honest and open. Never has someone described the phenomena of 'mirror faces' more perfectly. I am grateful for that."
—Ellen Page, star of Juno and Whip It

"Trinkets is a sweet, funny, edgy novel...imagine The Breakfast Club with girls and shoplifting. I absolutely loved it."—Victoria Justice, star of Victorious