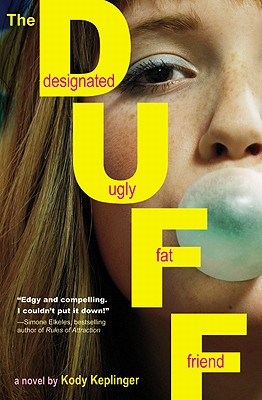 “From debut novelist (and 18-year-old college student!) Kody Keplinger comes a delightfully quirky novel that is impossible to put down! Bianca is equal parts smart, sensitive, strong, and sharp-tongued -- simply a wonderful heroine to root for. Keplinger's characters are interesting and avoid the common cliches of young adult fiction. The DUFF is not to be missed!”
— Megan Graves, Hooray for Books!, Alexandria, VA

An irreverent and irresistible New York Times bestselling romance between the so-called Designated Ugly Fat Friend and the Hot Jock.

Seventeen-year-old Bianca Piper may not be the prettiest girl in her high school, but she has a loyal group of friends, a biting wit, and a spot-on BS detector. She's also way too smart to fall for the charms of man-slut and slimy school hottie Wesley Rush, who calls Bianca the Duff--the Designated Ugly Fat Friend--of her crew.

But things aren't so great at home and Bianca, desperate for a distraction, ends up kissing Wesley. Worse, she likes it. Eager for escape, Bianca throws herself into a closeted enemies-with-benefits relationship with him.

Until it all goes horribly awry. It turns out Wesley isn't such a bad listener, and his life is pretty screwed up, too. Suddenly Bianca realizes with absolute horror that she's falling for the guy she thought she hated more than anyone.

Kody Keplinger was born and raised in a small Kentucky town. She wrote her first novel, The DUFF (Designated Ugly Fat Friend), during her senior year of high school. The DUFF was a YALSA Top Ten Quick Pick for Reluctant Readers and a Romantic Times Top Pick. Since then, Kody has written two more young adult novels, Shut Out and A Midsummer's Nightmare, and a middle grade novel, The Swift Boys & Me. She is the cofounder of Disability in Kidlit, a website devoted to the representation of disability in children's literature. Currently, Kody lives in New York City, where she teaches writing workshops and continues to write books for kids and teens. You can find out more about Kody and her books on her website: www.kodykeplinger.com.

"A complex, enemies-with-benefits relationship that the YA market has never seen before... Keplinger scores a first for a genre in which vampires and dystopian futures rule. Her snarky teen speak, true-to-life characterizations and rollicking sense of humor never cease in her debut."
—Kirkus

"Kudos to the 18-year-old Keplinger for writing a heroine whose complicated relationship with sex is honest and heartbreaking. This for-more-mature teens novel deftly illustrates how even consensual sex can be emotionally destructive, and captures thoughts about self-image and the many different types of relationships. Expect to be recommending THE DUFF to friends for years to come."
—Romantic Times