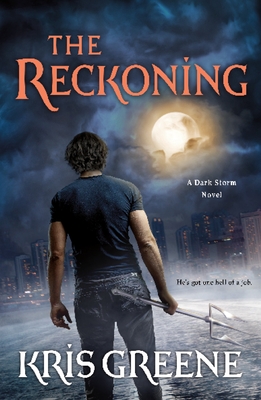 This is book number 3 in the A Dark Storm Novel series.

A Dark Storm Novel, Kris Greene's The Reckoning is the final book in an exciting fantasy series about a young man who discovers that it's his destiny to lead the war against the Darkness.

Not much is left of Gabriel's life ever since he discovered his true destiny as a warrior knight in the final battle against darkness. His life has been rife with soul-sucking demons and creatures straight out of the books he studied in college. His life is no longer ordinary. As a warrior, he has no choice but to fight for good. And if he screws up, the world is toast…

The war between good and evil has just been kicked up a notch for Gabriel Redfeather and his partner, the half Valkyrie, De Mona Sanchez. Gabriel is the only one who can stem the tide of darkness creeping across the land. But will he be able to do it without falling into darkness himself?

In the 3rd grade a teacher once asked Kris Greene what she wanted to be when she grew up, to which she responded ‘A witch.’ Growing up under not so pleasant conditions she often depended on her imagination to escape her day to day hardships and dreamt of a way to make her fictional escapes real and when she stumbled across a tattered copy of Interview with the Vampire she knew just how she would go about it, which led her to start keeping journals full of short stories which would eventually grow into action packed tales of sex, power and magic set in the New York City underworld.

Kris is the award-winning author of several urban-fantasy novels, with the Dark Storm series being her first major releases. Kris resides in New York City where she spends her time writing and working in her herb garden.