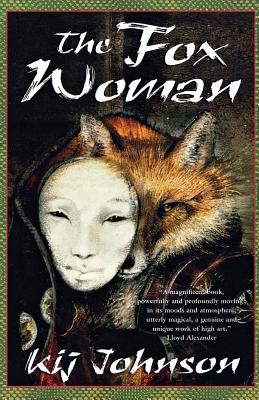 The Fox Woman is a powerful first novel, singing with lyrical prose and touching the deepest emotions. A historically accurate fantasy, it gives us a glimpse into, and an understanding of, the history that shaped the people of one of our world's greatest nations.

Kij Johnson has created an achingly beautiful love story, a fable wrapped in smoke and magic set against the fabric of ancient Japan. Johnson brings the setting lovingly to life, describing a world of formalities and customs, where the exchange of poetry is a form of conversation and everything has meaning, from the color of the silks on wears to how one may address others.

Yoshifuji is a man fascinated by foxes, a man discontented and troubled by the meaning of life. A misstep at court forces him to retire to his long-deserted country estate, to rethink his plans and contemplate the next move that might return him to favor and guarantee his family's prosperity.

Kitsune is a young fox who is fascinated by the large creatures that have suddenly invaded her world. She is drawn to them and to Yoshifuji. She comes to love him and will do anything to become a human woman to be with him.

Shikujo is Yoshifuji's wife, ashamed of her husband, yet in love with him and uncertain of her role in his world. She is confused by his fascination with the creatures of the wood, and especially the foxes that she knows in her heart are harbingers of danger. She sees him slipping away and is determined to win him back from the wild...for all that she has her own fox-related secret.

Magic binds them all. And in the making (and breaking) of oaths and honors, the patterns of their lives will be changed forever.

KIJ JOHNSON is an American fantasy writer noted for her adaptations of Japanese myths and folklore. Her Tor.com story "Ponies" won the 2011 Nebula Award for Best Short Story. Her story "Fox Magic" won the 1994 Theodore Sturgeon Award, her novel The Fox Woman won the Crawford Award for best debut fantasy novel, and her subsequent novel Fudoki was a finalist for the World Fantasy Award and was cited by Publishers Weekly as one of the best fantasy novels of its year. She is also an associate director of the Center for the Study of Science Fiction at the University of Kansas.

“The Fox Woman is a wonderfully evocative and gripping novel, a book that will stay with you and resonate in your heart long after the final page is turned.” —Charles de Lint

“The Fox Woman is a magnificent book, powerfully and profoundly moving, in its moods and atmosphere, utterly magical, a genuine and unique work of high art. And all of this expressed through language that is elegant, economical, graceful. The Fox Woman immediately sets the author in the front rank of today's novelists.” —Lloyd Alexander

“If you want lush prose, romantic settings, and a poetry-of-the-soul book, run--do not walk--to get this. God, I wish I had written it!” —Jane Yolen

“Kij Johnson reminds us that the magic (and strength) of Fantasy is seeing ourselves in the mirror of the Other. Never has that mirror shimmered more seductively. Look.” —Terry Bisson

“Lush, vivid, and charming, The Fox Woman is a beautifully written and poignant fable unlike any other fantasy I have ever read.” —Kevin J. Anderson

“I enjoyed presenting to Kij Johnson the Theodore Sturgeon Memorial Award for her short story 'The Fox Woman,' but I enjoyed even more reading the novel she has created around the Japanese myth of the fox who falls in love with a nobleman and becomes a woman. It is wise, witty, and wonderful.” —James Gunn