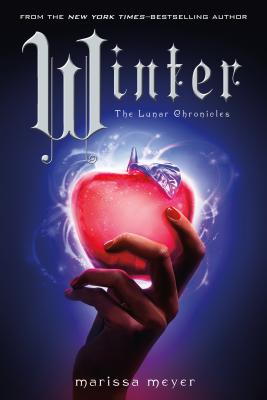 This is book number 4 in the The Lunar Chronicles series.

Cinder is back, with Kai, Scarlet, Wolf, Cress, Captain Thorne, and Jacin Clay and this time they are bringing the fight to Queen Levana on Luna. Winter picks up where Cress left off. Princess Winter is aware that Queen Levana is plotting something drastic against her and she doesn’t know what to do.  Winter is the fourth and final installment of Marissa Meyer’s The Lunar Chronicles. Meyer does not let her readers down, with her signature twists and turns and the fairy tale elements tweaked into something futuristic and new, Winter is just as much fun to read as Cinder, Scarlet, and Cress. Be sure to pick up your copy today! FYI - The series makes an excellent gift for that favorite fan of modern day fairy tales.

Princess Winter is admired by the Lunar people for her grace and kindness, and despite the scars that mar her face, her beauty is said to be even more breathtaking than that of her stepmother, Queen Levana.

Winter despises her stepmother, and knows Levana won't approve of her feelings for her childhood friend--the handsome palace guard, Jacin. But Winter isn't as weak as Levana believes her to be and she's been undermining her stepmother's wishes for years. Together with the cyborg mechanic, Cinder, and her allies, Winter might even have the power to launch a revolution and win a war that's been raging for far too long.

Can Cinder, Scarlet, Cress, and Winter defeat Levana and find their happily ever afters? Fans will not want to miss this thrilling conclusion to Marissa Meyer's national bestselling Lunar Chronicles series.

“In this final book in the Lunar Chronicles, the stepdaughter of the wicked Queen Levana joins Cinder, Scarlet, and Cress to defeat the Queen and restore Cinder—aka Selene—as the rightful ruler of Luna. Yes, it's another one of Meyer's very fractured fairy tales, in which she offers a new amalgam of Grimm's fairy tales, science fiction, violence, women's lib, and romance. Our Snow White stand-in, Winter, is beautiful in spite of facial scars, kind to all she encounters, mentally fragile, and in love with her lowly guard, Jacin . . . " —Booklist, starred review