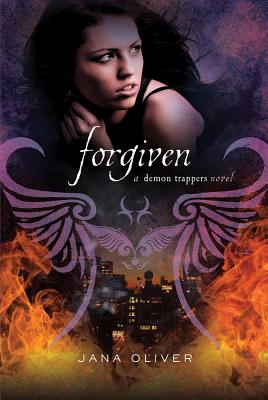 By Jana Oliver
Unavailable to Order
Out of Print

This is book number 3 in the Demon Trappers series.

The days are growing darker for 17-year-old demon trapper Riley Blackthorne. With her father's reanimated body back safely, Beck barely speaking to her because of a certain hunky Fallen angel, and a freshly-made deal with Lucifer, she has enough on her hands to last a normal teenage lifetime. Though she bargained with Heaven to save his life, her ex-boyfriend Simon has told the Vatican's Demon Hunters that she's working with Hell. So now she's in hiding, at the top of everyone's most-wanted list.

But it's becoming clear that this is bigger than Riley, and rapidly getting out of control: something sinister is happening in Atlanta… or someone. The demons are working together for the first time ever and refusing to die, putting civilians in harm's way. Riley thinks she might know who's behind it all, but who's going to believe her? Caught between her bargain with Heaven and her promise to Lucifer, Riley fears the final war is coming – and it may be closer than anyone thinks…

Jana Oliver is the award-winning author of the young adult urban fantasy series Demon Trappers, including The Demon Trapper's Daughter and Soul Thief. She is also the author of the Time Rovers series. She’s happiest when she’s researching outlandish urban legends, wandering around old cemeteries and dreaming up new stories. An Iowa native, she lives in Atlanta, GA.

“Oliver delivers a book that will delight her series fans. Adventurous and hypnotic, the characters will pull the reader in. In total, this book adds more drama and adult content to this popular series; a great installment!” —RT Book Reviews (4 stars) on Forgiven

“Caught between Heaven and Hell (and literally tattooed by both), 17-year-old apprentice demon-catcher Riley Blackthorne has made some bad deals... This invigorating entry in the series deepens readers' understanding of major characters and neatly ties up a few plot points while introducing new conflicts to tantalize fans until the next book arrives.” —Booklist on Forgiven

“The second Demon Trappers book is even better than the first. The demons are more wicked, the love is more epic, and there's even a twist ending that has me clamoring for the next book.” —RT Book Reviews (4 ½ stars) on Soul Thief

“Riley Blackthorne is all heart and no nonsense! She will no doubt join the ranks of the toughest, smartest urban fantasy heroines of all ages.” —Jeri Smith-Ready, award-winning author of Shade and Shift, on The Demon Trapper's Daughter

“The eternal war between good and evil finds a new battlefront in this successful urban fantasy, as Oliver spins the action-packed story of a young woman following in her father's footsteps… With a strong female heroine, a fascinating setting, and a complex, thrill-soaked story, this series is off to a strong start.” —Publishers Weekly on The Demon Trapper's Daughter

“Oliver's series start will suck you in from the first page, keeping you awake at night wondering what will happen next…thrilling, filled with action and a side of romance.” —RT Book Reviews (4 stars) on The Demon Trapper's Daughter

“Oliver offers plenty to appreciate in this inventive twist on the story of a girl breaking into a man's career field, including a nifty demon-classification system; a freaky zombie-creation business; a romantic undercurrent between Riley and her father's ex-partner, Beck... and a subplot with an earnest young suitor. Readers will delight in the novelty and eagerly await the next book in this proposed series.” —Booklist on The Demon Trapper's Daughter

“This was a really entertaining Young Adult Urban Fantasy novel with interesting characters and the kind of writing that has you wanting to read the entire book through in one setting. A great beginning to a series, and as the series continues, I'm sure the books will just get better. I recommend this to the Young Adult and Adult crowd as well.” —Affaire de Coeur (4 stars) on The Demon Trapper's Daughter