The Burning: The Tulsa Race Massacre of 1921 (Paperback) 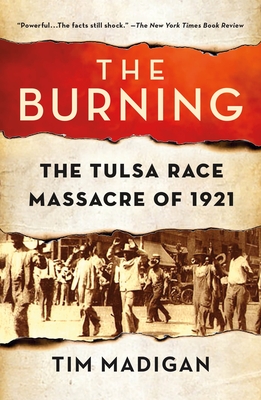 “A powerful book, a harrowing case study made all the more so by Madigan's skillful, clear-eyed telling of it.” —Adam Nossiter, The New York Times Book Review

On the morning of June 1, 1921, a white mob numbering in the thousands marched across the railroad tracks dividing black from white in Tulsa, Oklahoma, and obliterated a black community then celebrated as one of America's most prosperous. 34 square blocks of Tulsa's Greenwood community, known then as the Negro Wall Street of America, were reduced to smoldering rubble.

And now, 80 years later, the death toll of what is known as the Tulsa Race Riot is more difficult to pinpoint. Conservative estimates put the number of dead at about 100 (75% of the victims are believed to have been black), but the actual number of casualties could be triple that. The Tulsa Race Riot Commission, formed two years ago to determine exactly what happened, has recommended that restitution to the historic Greenwood Community would be good public policy and do much to repair the emotional as well as physical scars of this most terrible incident in our shared past.

With chilling details, humanity, and the narrative thrust of compelling fiction, The Burning will recreate the town of Greenwood at the height of its prosperity, explore the currents of hatred, racism, and mistrust between its black residents and neighboring Tulsa's white population, narrate events leading up to and including Greenwood's annihilation, and document the subsequent silence that surrounded the tragedy.

TIM MADIGAN is an award-winning journalist and author of several books, including I'm Proud of You: My Friendship with Fred Rogers. He and his wife, Catherine live in Fort Worth, Texas.

“Madigan somehow manages to tell the story of what happened with grace, purity and haunting starkness.” —Buzz Bissinger

“A powerful book, a harrowing case study made all the more so by Madigan's skillful, clear-eyed telling of it.” —Adam Nossiter, The New York Times Book Review

"A sobering, frightening account of what happens when that foul beast, racism, breaks its fragile leash."--Kirkus, starred review

"Madigan provides a riveting account of one of the most shameful episodes in the troubled history of race relations in the U.S. This cultural and sociological dissection of a twentieth-century tragedy makes difficult but compelling reading."--Booklist

"The story of Greenwood is written in such chilling detail and clarity that one can almost smell the smoke and hear the cries. This is historical reporting at its best."--Larry Cox, Arizona Daily Star

"The Burning is a bold and worthwhile beginning. With its richness of horrifying detail, the book compels our attention, restoring the hateful episode's ghastly but necessary claim on the public conscience."--Morning Star-Telegram