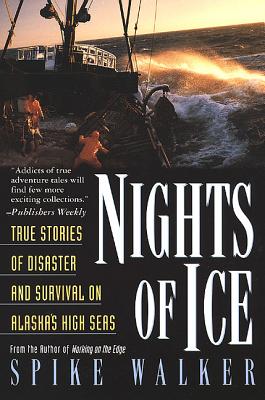 Spike Walker has spent more than a decade fishing in the subzero hell of Alaska's coastal waters. This collection--coming on the heels of his classic memoir Working on the Edge--is a testament to the courage of those who brave nature's wrath each fishing season, and to the uncontrolled power of nature herself.. The crewmen in Nights of Ice face a constant onslaught of roaring waves, stories-high swells, and life-stealing ice. Tested by the elements, these seamen battle for their vessels and their lives, on every page evincing a level of courage and a will to live seldom found elsewhere in modern society.

Spike Walker spent nine seasons as a crewman aboard some of the most successful crab boats in the Alaskan fleet. While "working on the edge," the crewmen's term for laboring in the brutal outer reaches of the Bering Sea, Spike encountered 110-mph winds, rode out one of the worst storms in Alaska's history, worked nonstop for seventy-four hours without sleep, participated in record catches of king crab, saw ships sink, helped rescue their crews, and had close friends die at sea.  In addition to his crab-fishing experience, Spike Walker has worked in the offshore oilfields of Louisiana and Texas; along the Mississippi River as a certified, commercial deep-sea diver; and in Washington, Oregon, Idaho, and Alaska as a logger. He is the author of several works of nonfiction, including Working on the Edge, Nights of Ice, and Coming Back Alive.

“Addicts of true adventure tales will find few more exciting collections thatn this account of eight battles fought by men and women against the sea off the coast of Alaska between 1980 and 1994...[Walker] knows many of those who survived the ordeals he describes here so vividly.” —Publisher's Weekly

“It is said that America's most dangerous profession is commercial fishing on Alaska's high seas. Even a quick dip into this collection will convince you of that...Grab-you-by-the-throat, rip snorting tales of diasaster on furious high seas.” —Kirkus Reviews