Working on the Edge: Surviving In the World's Most Dangerous Profession: King Crab Fishing on Alaska's High Seas (Paperback) 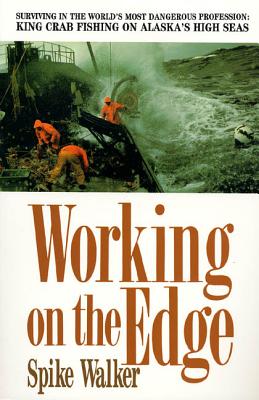 No profession pits man against nature more brutally than king crab fishing in the frigid, unpredictable waters of the Bering Sea. The yearly death toll is staggering (forty-two men in 1988 alone); the conditions are beyond most imaginations (90-mph Arctic winds, 25-foot seas, and super-human stretches of on-deck labor); but the payback, if one survives can be tens of thousands of dollars for a month-long season.

In a breathtaking, action-packed account that combines his personal story with the stories of survivors of the industry's most harrowing disasters, Spike Walker re-creates the boom years of Alaskan crab fishing--a modern-day gold rush that drew hundreds of fortune-and adventure-hunters to Alaska's dangerous waters--and the crash that followed.

Spike Walker spent nine seasons as a crewman aboard some of the most successful crab boats in the Alaskan fleet. While "working on the edge," the crewmen's term for laboring in the brutal outer reaches of the Bering Sea, Spike encountered 110-mph winds, rode out one of the worst storms in Alaska's history, worked nonstop for seventy-four hours without sleep, participated in record catches of king crab, saw ships sink, helped rescue their crews, and had close friends die at sea.  In addition to his crab-fishing experience, Spike Walker has worked in the offshore oilfields of Louisiana and Texas; along the Mississippi River as a certified, commercial deep-sea diver; and in Washington, Oregon, Idaho, and Alaska as a logger. He is the author of several works of nonfiction, including Working on the Edge, Nights of Ice, and Coming Back Alive.

“This will become the definitive account of this perilous trade, an addition to the literature of the sea.” —James A. Michener

“Skillfully written and intelligently observed with all the muscle, beauty, and energy of a 145-foot Alaskan fishing boat making way through the treacherous waters of Shelikof Strait...” —Kirkus Reviews

“Walker writes with such intensity that no one will walk away from this book without travelling some small part of the way with these men (and a few women) who work on the wild, water edge of civilization, pushing and pushed to the limits of strength and stamina.” —Alaska Fisherman's Journal