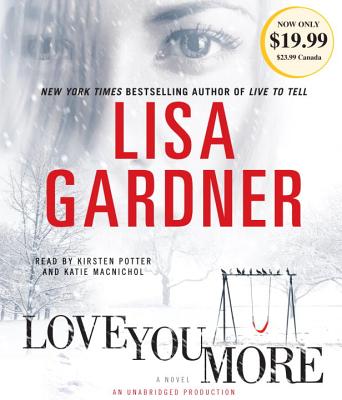 This is book number 5 in the Detective D. D. Warren series.

WHO DO YOU LOVE?

One question, a split-second decision, and Brian Darby lies dead on the kitchen floor. His wife, state police trooper Tessa Leoni, claims to have shot him in self-defense, and bears the bruises to back up her tale. For veteran detective D. D. Warren it should be an open-and-shut case. But where is their six-year-old daughter?

As the homicide investigation ratchets into a frantic statewide search for a missing child, D. D. Warren must partner with former lover Bobby Dodge to break through the blue wall of police brotherhood, seeking to understand the inner workings of a trooper’s mind while also unearthing family secrets. Would a trained police officer truly shoot her own husband? And would a mother harm her own child?

For Tessa Leoni, the worst has not yet happened. She is walking a tightrope, with nowhere to turn, no one to trust, as the clock ticks down to a terrifying deadline. She has one goal in sight, and she will use every ounce of her training, every trick at her disposal, to do what must be done. No sacrifice is too great, no action unthinkable. A mother knows who she loves. And all others will be made to pay.

Lisa Gardner is the New York Times bestselling author of thirteen novels. Her Detective D. D. Warren novels include Live to Tell, Hide, Alone, and the International Thriller Writers’ Award-winning novel The Neighbor. Her FBI Profiler novels include Say Goodbye, Gone, The Killing Hour, The Next Accident, and The Third Victim. She lives with her family in New England.

“One of the best thriller writers in the business has written her best book to date.”—Associated Press

“Leads the reader on a breathless search until the final pages.”—The Star-Ledger

“Having already produced a dozen successful thrillers, Gardner proves herself not only a very clever storyteller here, capable of pulling together a complicated series of events, but also a writer able to invest her characters (particularly her female ones) with emotional substance. Compelling and unexpected, this tale of mystery and maternal devotion shows Gardner at her very best.”—Booklist (starred review)

“Gardner’s characters are fully drawn . . . and her taut storytelling and dizzying plot will appeal to fans of Harlan Coben.”—Library Journal (starred review)

“Gardner hits an impressive new high with her latest taut thriller. . . . Unbelievably gripping and clever, you won’t want to put it down until the final page!”—RT Book Reviews

“This book had me at the author’s name. Lisa Gardner . . . no one owns this corner of the genre the way she does—and Love You More might be her best ever.”—Lee Child

“Tessa Leoni is a dedicated single mom when she is swept away by a man who turns out to be the wrong guy. Emotionally true, harrowing, and unputdownable. Brava, Lisa Gardner!”—Lisa Scottoline

“A heart-pounding tale of family drama by the Mozart of thriller writers. I could not tear myself away.”—Tess Gerritsen

“I dare you to try and put this book down. Gardner does her homework and loads this thriller chockfull of authentic details, giving readers a front seat ride that will leave you gasping.”—Alex Kava

“Lisa Gardner is an amazing writer. Her characters are multi-dimensional and believable, and they tell the kinds of stories that grip you right from the first page.”—Karin Slaughter

“I loved that this book had not just one but two amazing, compelling, complex, and incredibly strong kick-ass female characters.”—Suzanne Brockmann

“Lisa Gardner’s books come with a built-in set of hands. They reach up out of the pages, grab you by the lapels, and hold you until you’ve read to the final, suspense-filled sentence. And Love You More is no exception.”—Linwood Barclay

“It has the chills and thrills to excite, and the heart to draw you in.”—Sandra Brown