Everything Is Going to Kill Everybody: The Terrifyingly Real Ways the World Wants You Dead (Paperback) 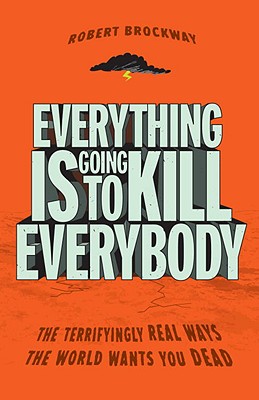 Just when you thought you’d accepted your own mortality . . . Everything Is Going to Kill Everybody is bringing panic back. Twenty illustrated, hilariously fear-inducing  essays reveal the chilling and very real experiments, dangerous emerging technologies, and terrifying natural disasters that soon could—or very nearly already did—bring about the end of humanity. In short, everything in here will kill you and everyone you love. At any moment. And nobody’s told you about it—until now:

•   Experiments in green energy like the HiPER, which uses massive lasers to create a tiny “contained” sun; it’s an idea that could save the world if it doesn’t consume us all in a fiery fusion reaction first.
•   Global disasters like the hypercane—a hurricane so large it could cover all of North America and shoot trailer parks into space!
•   Terrifying new developments in robotics like the EATR, which powers itself on meat—an invention in the running for “Worst Decision Made by Anybody.”

“A bold, terrifying read that goes down smooth thanks to a crisp infusion of humor. Thanks to this book, I can now aspire to dying in cooler ways than I ever thought possible. F**k you, old age. I’m holding out for a megatsunami.”
—Daniel H. Wilson, author of How To Survive a Robot Uprising

“The book is proof that the ridiculous and the horrible are joined at the hip and will never be separated; in a universe that seems to continually be thinking up new ways to kill us, Brockway knows there is but one rational response: to point at it and laugh.”
—David Wong, author of John Dies at the End

“There has never been a hipper Prophet of Doom. Irreverently entertaining and terrifyingly accurate, the probability of our future death has never been more fun.”
—Michael Largo, author of Final Exits: The Illustrated Encyclopedia of How We Die

“This book is hilarious. As if I wasn't already afraid the leave the house. What's that? Brockway suggests the apocalypse doesn't knock? What if I cower under a desk? Well, damn. I might as well have another nacho.”
—Garth Sundem, author of The Geeks’ Guide to World Domination