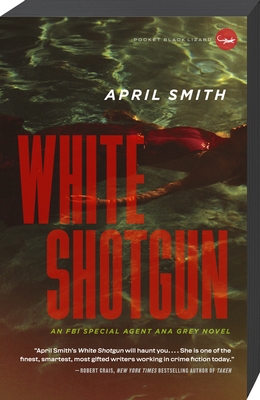 This is book number 4 in the Special Agent Ana Grey series.

SPECIAL CIRCUMSTANCES: Special Agent Grey will arrive during Il Palio, a famous horse race and time of high tension in the city.  Violent outbreaks among rival contradas (neighborhoods) are common.

WARNING:  THE SOUTHERN MAFIAS HAVE BEEN MAKING STRONG INROADS IN THIS PART OF ITALY.  MANY ENEMIES GO “WHITE SHOTGUN.” THEY DISAPPEAR.

April Smith is the author of North of Montana; Be the One; Good Morning, Killer; Judas Horse; and White Shotgun. She is also a television screenwriter and producer, whose most recent work was a TNT original movie based on Good Morning, Killer. She lives in Santa Monica.

“April Smith’s White Shotgun will haunt you. . . . She is one of the finest, smartest, most gifted writers working in crime fiction today.” —Robert Crais, New York Times bestselling author of Taken

“The adrenaline is nicely balanced by [Ana’s] grappling with loyalties to both blood and Bureau.” —People

“A satisfying thriller, but what’s even more impressive is the crisp, spare writing.” —Los Angeles Times

“Smith is a writer with a laser eye that can record with cold precision the details of the daily life of her crime-solving subjects.” —Chicago Tribune

“April Smith writes in the forceful style of a true literary maverick, someone who has earned the right to break a few rules.” —The New York Times

“Smith has created a vibrant, intriguing cast of characters and has a superb eye for detail, as evidenced by her vivid descriptions of the Italian landscape. . . . Her true forte is storytelling.” —Pittsburgh Tribune-Review

“Ana Grey is a credible, fascinating heroine, both worldly and rueful about her unsettled life. . . .  Tight suspense and fascinating background.” —Booklist (starred review)