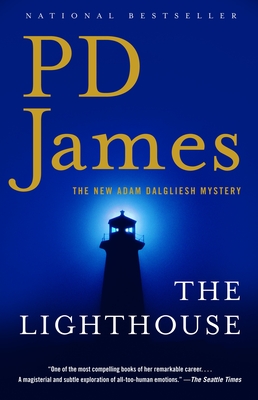 A high-profile murder on a quiet island retreat reveals a slew of motives and suspects, and an unexpected danger arises for Dagliesh and his team. Multifaceted characters make finding the murderer a challenge and this book a pleasure to read.

Combe Island off the Cornish coast is a restful haven for the elite. But when one of its distinguished visitors is found hanging from the island’s famous lighthouse in what appears to have been a murder, the peace is shattered. Commander Adam Dalgliesh is called in to handle the sensitive case, but at a difficult time for him and his depleted team. He is uncertain about his future with his girlfriend Emma Lavenham; his principle detective Kate Miskin is going through an emotional crisis; and the ambitious Sergeant Francis Benton-Smith is not happy about having a female boss. After a second brutal killing, the whole investigation is jeopardized, and Dalgliesh is faced with a danger even more insidious than murder.

P. D. James is the author of twenty books, many of which feature her detective hero Adam Dalgliesh and have been televised or filmed. She was the recipient of many honors, including the Mystery Writers of America Grand Master Award and the National Arts Club Medal of Honor for Literature, and in 1991 was created Baroness James of Holland Park. She died in 2014.

"One of the most compelling books of her remarkable career. . . . A magisterial and subtle exploration of all-too-human emotions."–The Seattle Times“Appealing. . . . Something to gladden hearts–at least among aficionados of the formally perfect murder scheme. . . . Even its murder victim is delectable. . . . The reader . . . secretly thrills to the discovery of each new corpse.”–The New York Times"Thrilling. . . . Tantalizing. . . . Intense. . . . The solution to the crime is satisfyingly elegant."–The Boston Herald“James is at the height of her writing powers in describing this craggy bit of rock off England’s coast so thoroughly that you can feel the wind against your face and the scrubland brush against your boots. Like Dalgleish and Miskin, you will wish you could return.” –The Baltimore Sun“With her trademark blend of subtle characterization, vivid sense of place and deceptively simple plot, James pulls off another triumph. A beautifully written page-turner from the queen of the genre.” –Toronto Sun “An elegant and perceptive writer – rich drifts of prose pile up on the page, descriptive passages are Dickensian in length, ornament and power. . . James’s many fans will relish The Lighthouse, for all its poise and narrative familiarity.” –The Globe and Mail“James’s gifts animate and transform the armature into something exceptional. Her disciplined conventions, her observation of social and class niceties, renew the traditional Franco-British drama of domestic crime. She is a very superior writer of detection.” –Times Literary Supplement“James has proven that she deserves her reputation as our leading ‘literary’ crime writer. The Lighthouse confirms that she is also the most enjoyable.” –Daily Express