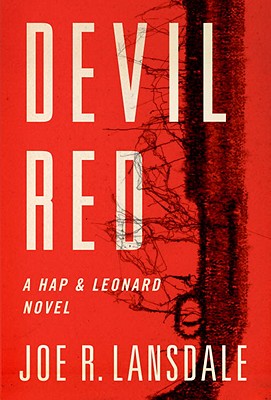 Hap Collins and Leonard Pine return in a red-hot, mayhem-fueled thriller to face a vampire cult, the Dixie Mafia, and the deadliest assassin they’ve ever encountered—Devil Red.

When their friend Marvin asks Hap and Leonard to look into a cold-case double homicide, they’re more than happy to play private investigators: they like trouble, and they especially like getting paid to find it. It turns out that both of the victims were set to inherit serious money, and one of them ran with a vampire cult. The more closely Hap and Leonard look over the crime-scene photos, the more they see, including the image of a red devil’s head painted on a tree. A little research turns up a slew of murders with that same fiendish signature. And if that’s not enough, Leonard has taken to wearing a deerstalker cap . . . Will this be the case that finally sends Hap over the edge?

Full up with Lansdale’s trademark—whip-smart dialogue, relentless pacing, and unorthodox-to-say-the-least characters—Devil Red is one rambunctious thrill ride by one hell of a writer.

Joe R. Lansdale is the author of more than a dozen novels, including "Vanilla Ride, ""Leather Maiden, ""Sunset and Sawdust, "and "Lost Echoes. "He has received the British Fantasy Award, the American Mystery Award, the Edgar Award, the Grinzane Cavour Prize for Literature, and seven Bram Stoker Awards. He lives with his family in Nacogdoches, Texas.

“Joe Lansdale may be Texas’s bloody answer to Mark Twain.” —The Austin Chronicle

“The humor and dialogue keep the narrative rocketing along.” —Entertainment Weekly

“Joe R. Lansdale’s latest fun-loving meditation on the forces of good and evil. . . .  Plenty of the trademark Hap and Leonard camaraderie, wise-cracking and profanity.” —The Free Lance-Star

“If you've read more than a few words strung together by Lansdale in any given context, you're going to pick up a book with his name on the cover. . . . A new installment in the [Hap and Leonard] series is cause to rejoice.” —BookReporter

“Joe Lansdale is one of the greatest yarn spinners of his generation: fearless, earthy, original, manic and dreadfully funny.” —The Dallas Morning News