The University of Chicago: A History (Hardcover) 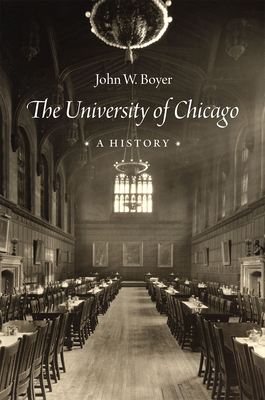 One of the most influential institutions of higher learning in the world, the University of Chicago has a powerful and distinct identity, and its name is synonymous with intellectual rigor. With nearly 170,000 alumni living and working in more than 150 countries, its impact is far-reaching and long-lasting.

With The University of Chicago: A History, John W. Boyer, Dean of the College since 1992, presents a deeply researched and comprehensive history of the university. Boyer has mined the archives, exploring the school’s complex and sometimes controversial past to set myth and hearsay apart from fact. The result is a fascinating narrative of a legendary academic community, one that brings to light the nature of its academic culture and curricula, the experience of its students, its engagement with Chicago’s civic community, and the conditions that have enabled the university to survive and sustain itself through decades of change.

Boyer’s extensive research shows that the University of Chicago’s identity is profoundly interwoven with its history, and that history is unique in the annals of American higher education. After a little-known false start in the mid-nineteenth century, it achieved remarkable early successes, yet in the 1950s it faced a collapse of undergraduate enrollment, which proved fiscally debilitating for decades. Throughout, the university retained its fierce commitment to a distinctive, intense academic culture marked by intellectual merit and free debate, allowing it to rise to international acclaim. Today it maintains a strong obligation to serve the larger community through its connections to alumni, to the city of Chicago, and increasingly to its global community.

Published to coincide with the 125th anniversary of the university, this must-have reference will appeal to alumni and anyone interested in the history of higher education of the United States.

John W. Boyer is the Martin A. Ryerson Distinguished Service Professor in History at the University of Chicago. In 2012, he was appointed to a fifth term as Dean of the College.  A specialist in the history of the Habsburg Empire, he has written three books on Austrian history, including, most recently, Karl Lueger (1844–1910): Christlichsoziale Politik als Beruf.

"A comprehensive examination of the choices made over the years in the managing of the University of Chicago as a major academic research enterprise alongside an undergraduate college."
— Journal of the Illinois State Historical Society

“The question before us is how to become one in spirit, not necessarily in opinion.”
— William Rainey Harper, first president of the University of Chicago

“If the first faculty had met in a tent, this still would have been a great university.”
— Robert Maynard Hutchins, former University of Chicago president