The War of the Worlds (Oxford World's Classics) (Paperback) 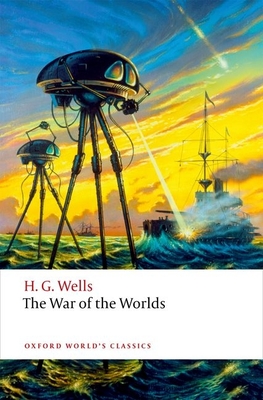 One of the most important and influential invasion narratives ever written, The War of the Worlds (1897) describes the coming of the Martians, who land in Woking, and make their way remorselessly towards the capital, wreaking chaos, death, and destruction. The novel is closely associated with anxiety about a possible invasion of Great Britain at the turn of the century, and concerns about imperial expansion and its impact, and it drew on the latest astronomical knowledge to imagine a desert planet, Mars, turning to Earth for its future. The Martians
are also evolutionarily superior to mankind. About the Series: For over 100 years Oxford World's Classics has made available the broadest spectrum of literature from around the globe. Each affordable volume reflects Oxford's commitment to scholarship, providing the most accurate text plus a wealth of other valuable features, including expert
introductions by leading authorities, voluminous notes to clarify the text, up-to-date bibliographies for further study, and much more.

Darryl Jones has taught at Trinity College Dublin since 1994. Prior to this he taught in the University of Lodz, Poland. He has held Visiting Professorships at Dartmouth College, New Hampshire, Babes Bolyai University, Cluj, Transylvania, and Tongji University, Shanghai. He is the author or editorof nine books, including Horror: A Thematic History in Fiction and Film (Arnold/OUP 2002), It Came From the 1950s!: Popular Culture, Popular Anxieties (with Elizabeth McCarthy and Bernice M. Murphy, Palgrave Macmillan 2011), and for Oxford World's Classics, M. R. James, Collected Ghost Stories (OUP, 2011, 2013) and Arthur Conan Doyle's Gothic Tales (2016).