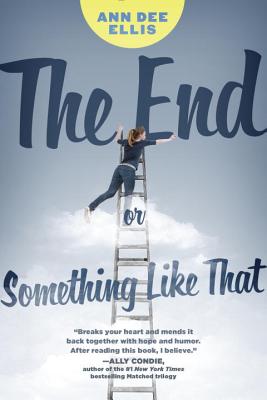 By Ann Dee Ellis
Unavailable to Order
Hard to Find

For fans of Gayle Forman and Stephen Chbosky, an achingly raw and surprisingly funny novel about coping with loss

Emmy’s best friend Kim had promised to visit from the afterlife after she died. But so far Kim hasn’t shown up even once. Emmy blames herself for not believing hard enough. Finally, as the one-year anniversary of Kim's death approaches, Emmy is visited by a ghost—but it’s not Kim. It’s Emmy’s awful dead science teacher.

Emmy can’t help but think that she's failed at being a true friend. But as more ghosts appear, she starts to realize that she's not alone in her pain. Kim would have wanted her to move forward—and to do that, Emmy needs to start letting go.

Ann Dee Ellis is the author of This is What I Did: and Everything is Fine. This is What I Did: received three starred reviews and was an ALA Best Book for Young Adults, an IRA honor book, and a VOYA Top Shelf Fiction pick. Ann Dee lives in Utah with her husband and four sons.

Rave reviews for The End or Something Like That

“The End or Something Like That dares you to suspend all disbelief and look at loss, and life itself, in an entirely new way.  This is a hilarious and awesomely weird ode to friendship and youth—with the kind of stellar prose that won’t let you look away.” - John Corey Whaley, Printz Award winning-author of Where Things Come Back

“The End or Something Like That breaks your heart and mends it back together with hope and humor. After reading this book, I believe.” - Ally Condie, author of the #1 New York Times Bestselling Matched Trilogy

* "The Las Vegas setting powerfully contrasts the absurdity of life against the separation of death, and several truly uncomfortable scenes involving Emmy’s classmates lays bare just how ill-equipped many people are to handle death. A hard-hitting story about remembering the dead while not forgetting the living." - Publishers Weekly, starred review

"Ellis skillfully captures what it’s like to be a kid who flies beneath the radar and is afraid to speak up." - School Library Journal

"The choppy, edgy tone of Ellis’ dialogue illuminates Emmy’s longing for her old friend. She practically burns with intensity, even as she gradually begins to move on." - Booklist

“Incredibly funny, sad, magical, and real all at the same time. Count me as a major fan.” - Holly Goldberg Sloan, New York Times bestselling author of Counting by 7s

“Ann Dee Ellis is my own personal J.D. Salinger. Sometimes haunted, sometimes haunting, but always achingly human, she finds truth in a burrito and a pizza boy, a fistful of gummy bears, and a dead science teacher. You will truly love this book.” - Margaret Stohl, New York Times bestselling co-author of the Beautiful Creatures series

“Ann Dee Ellis has one of the most interesting voices I know. I love the humor, honesty, and restraint with which she explores Emmy’s complicated relationship with the past, the present, and herself.” - Sara Zarr, National Book Award Finalist for Story of a Girl