Nights at the Circus (Paperback) 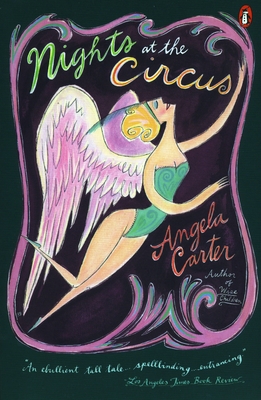 Winner of the James Tait Black Memorial Prize for fiction

From the master of the literary supernatural and author of The Bloody Chamber, her acclaimed novel about the exploits of a circus performer who is part-woman, part-swan

Sophi Fevvers—the toast of Europe's capitals, courted by the Prince of Wales, painted by Toulouse-Lautrec—is an aerialiste extraordinaire, star of Colonel Kearney's circus. She is also part woman, part swan. Jack Walser, an American journalist, is on a quest to discover Fevvers's true identity: Is she part swan or all fake? Dazzled by his love for Fevvers, and desperate for the scoop of a lifetime, Walser joins the circus on its tour. The journey takes him—and the reader—on an intoxicating trip through turn-of-the-century London, St. Petersburg, and Siberia—a tour so magical that only Angela Carter could have created it.

Angela Carter (1940–1992) wrote nine novels and numerous short stories, as well as nonfiction, radio plays, and the screenplay for Neil Jordan's 1984 movie The Company of Wolves, based on her story of the same name. She won numerous literary awards, traveled and taught widely in the United States, and lived in London.

"Night at the Circus is good, clean fun—well, good fun anyway. Its raunchy moments are steaming, bizarre, at times unsettling, but there is definitely an appreciation here for love, sentiment, and entertainment." —Raymond Mungo, San Francisco Chronicle

"A three-ring extravaganza . . . Carter's brand of fanciful and sometimes kinky feminism has never been more thoroughly or entertainingly on display." —Time

“Carter produced . . . fiction that was lavishly fabulist and infinitely playful, with a crown jeweler’s style, precise but fully colored. . . . Her books are . . . revered by fans of speculative fiction stateside and have influenced writers as diverse as Rick Moody, Sarah Waters, Neil Gaiman, Jeff VanderMeer, Jeanette Winterson and Kelly Link. Salman Rushdie, who became her friend, described her as ‘the first great writer I ever met.’ Yet her legacy has been a slow and stealthy one, invisible to many of the readers who have benefited from it. . . . Most contemporary literary fiction with a touch of magic, from Karen Russell’s to Helen Oyeyemi’s, owes something to Angela Carter’s trail-blazing. . . . If our personal and literary spaces feel more wide open now, she’s one of the ones we have to thank.” —Laura Miller, Salon

“She writes a prose that lends itself to magnificent set pieces of fastidious sensuality . . . dreams, myths, fairy tales, metamorphoses, the unruly unconscious, epic journeys, and a highly sensual celebration of sexuality in both its most joyous and darkest manifestations.” —Ian McEwan