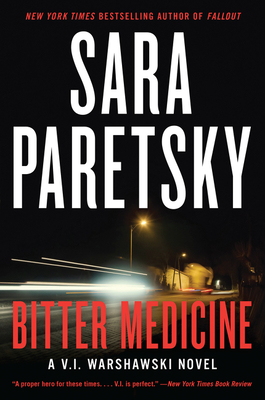 Young, diabetic, and pregnant, Consuelo Alvarado is lucky to have a mentor in V.I. Warshawski. But not even V.I. can help when Consuelo goes into premature labor in a remote suburb; mother and baby both die in the nearby hospital. When a young resident starts raising questions about Consuelo’s treatment, what seemed like a tragic accident turns into something far more disturbing. What connection could the hospital have with Chicago’s street gangs? What heavy secret is the hospital’s neonatologist carrying? The questions the detective asks cut to the heart of everything that is troubling about the practice of medicine in America. Can V.I. sort out the answers before she herself ends up in the hospital morgue?

Hailed by P. D. James as “the most remarkable” of modern crime writers, Sara Paretsky is the New York Times bestselling author of twenty-two novels, including the renowned V.I. Warshawski series. She is one of only four living writers to have received both the Grand Master Award from the Mystery Writers of America and the Cartier Diamond Dagger from the Crime Writers Association of Great Britain. She lives in Chicago.

“A proper hero for these times . . . To us, V.I. is perfect. . . . Paretsky is justly praised for referencing vital social issues in her mysteries, but here we also get a taste of her flair for creating offbeat but believable characters.”
— The New York Times Book Review on Dead Land

“Sara Paretsky’s gloriously kick-ass private eye, V.I. ‘Vic’ Warshawski, is back for the 20th time in a political-rot thriller that’s the definition of perfection in the genre. . . . The novel’s robustly flavorsome cast of characters includes a semi-deranged land preservationist, a corrupt Nobel Prize winner, a Chilean Ayn Rand disciple and several wonderful dogs."
— The Washington Post on Dead Land

“As usual, Paretsky is less interested in identifying whodunit than in uncovering a monstrous web of evil, and this web is one of her densest and most finely woven ever. So fierce, ambitious, and far-reaching that it makes most other mysteries seem like so many petit fours.” — Kirkus Reviews on Dead Land

“Legendary V.I. Warshawski is as dogged and ferocious as ever. So is Sara Paretsky, who is at the top of her crime novel game.”
— C.J. Box on Dead Land

“Considerable pleasure comes from following the legendary heroine through an impenetrable maze of felonies knowing that you’re in a master’s hands.” — Kirkus Reviews

“An author of matchless intelligence, craft, and power. This is why Sara Paretsky reigns as one of the all-time greats.” — Karin Slaughter

“Paretsky is the gold standard for novels dealing with crime and its consequences.” — Charlaine Harris

“V.I. Warshawski is one of my all-time favorite investigators. Doesn’t get any better than this!” — Lisa Gardner

“The most remarkable of the moderns is Sara Paretsky. . . . No other crime writer has so powerfully and effectively combined a well-crafted detective story with the novel of social realism.” — P.D. James

“Sara Paretsky’s legendary P.I. is at the top of her game.” — Tess Gerritsen

“Wonderful company and a rich discovery awaiting those who have yet to meet [Warshawski]. ” — Los Angeles Times

“Undoubtedly one of the best-written characters in mystery fiction. ” — Baltimore Sun

“As long as Paretsky’s hotheaded, quick-witted sleuth is on the job, imperiled young women . . . will always have a champion.” — New York Times Book Review

"Sara Paretsky’s gloriously kick-ass private eye, V.I. “Vic” Warshawski, is . . .  the definition of perfection in the genre." — The Washington Post