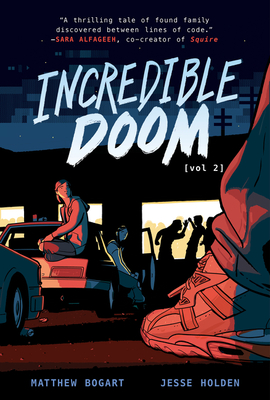 This is book number 2 in the Incredible Doom series.

“A thrilling tale of found family discovered between lines of code.”—Sara Alfageeh, co-creator of Squire

It may look to the unwitting outsider like a broken-down ranch house in the Ohio suburbs—but to those in the know, Evol House is the unexpected sanctuary of truant teens, punk rockers, nerds, and outcasts. At least, that’s what it’s supposed to be. Lately, it feels like everything’s falling apart.

In this thrilling sequel to graphic novel Incredible Doom: Volume 1, Samir finds that life as a teenage runaway isn’t all he thought it would be; Allison spirals trying to impress her new “friends”, Tina considers leaving town to follow a passionate new connection; and Richard faces down a volatile classmate with a score to settle.

Can these friendships, forged on the internet—the most controversial tool of the modern era—survive the “real world”… or will they drop like a bad connection?

“Perfectly captures the mystery and wonder of the early days of the internet.” —Andy Baio, author of Waxy.org and co-founder of XOXO

"A rush of love for brave beginnings—of both the early internet and the teens who used it to find themselves and each other." —Eleanor Davis, author of The Hard Tomorrow and How to Be Happy

"A compelling story complimented by pleasingly minimal art that skillfully evokes a sense of loneliness and isolation." —Savanna Ganucheau, co-creator of Bloom

"A sharp and authentic wild ride that brought me back to my teenage years as a punk with a dial-up connection.” —Kevin Panetta, co-creator of Bloom

“A poignant and often hilarious reminder that technology is at its best when it’s easing the ache of loneliness and bringing people together." —Jeff Zentner, Morris Award-winning author of The Serpent King

“The human stories of desperation, of reaching out, and of discovering new worlds really shine here.” —Booklist (starred review)

“A retro-tech drama that gets so much of the Nineties right that it hurts.” —School Library Journal (starred review)

Matthew Bogart is a cartoonist living in Portland, Oregon. He has been publishing comics since he was ten and his father let him loose on the office photocopier.

Matthew Bogart is a cartoonist living in Portland, Oregon. He has been publishing comics since he was ten and his father let him loose on the office photocopier.

Jesse Holden is a writer, designer, and creative collaborator on comics, novels, podcasts, and video games. He lives in Portland with his dog, Fergus.