A River Enchanted: A Novel (Elements of Cadence #1) (Hardcover) 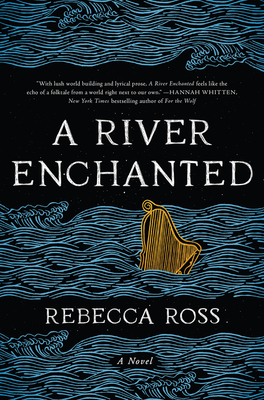 This is book number 1 in the Elements of Cadence series.

Cadence is an island full of magic, where words and whispers are carried through the wind, where footpaths change direction upon a whim, and where songs hold true enchantment. Jack hasn't returned to the island in years, not since he left as a boy to study music at the mainland's University. But when Jack is summoned to the island to help discover who - or what - is behind the sudden disappearance of young girls at Cadence, he is swept away in the island's mystery, magic, and inhabitants. A River Enchanted reads like a long lost folktale, effortlessly weaving magic and mystery throughout its narrative culminating in a thoroughly enjoyable read.

“With lush world building and lyrical prose, A River Enchanted feels like the echo of a folktale from a world right next to our own.” —Hannah Whitten, New York Times bestselling author of For the Wolf

House of Earth and Blood meets The Witch's Heart in Rebecca Ross’s brilliant first adult fantasy, set on the magical isle of Cadence where two childhood enemies must team up to discover why girls are going missing from their clan.

Jack Tamerlaine hasn’t stepped foot on Cadence in ten long years, content to study music at the mainland university. But when young girls start disappearing from the isle, Jack is summoned home to help find them. Enchantments run deep on Cadence: gossip is carried by the wind, plaid shawls can be as strong as armor, and the smallest cut of a knife can instill fathomless fear. The capricious spirits that rule the isle by fire, water, earth, and wind find mirth in the lives of the humans who call the land home. Adaira, heiress of the east and Jack’s childhood enemy, knows the spirits only answer to a bard’s music, and she hopes Jack can draw them forth by song, enticing them to return the missing girls.

As Jack and Adaira reluctantly work together, they find they make better allies than rivals as their partnership turns into something more. But with each passing song, it becomes apparent the trouble with the spirits is far more sinister than they first expected, and an older, darker secret about Cadence lurks beneath the surface, threatening to undo them all.

With unforgettable characters, a fast-paced plot, and compelling world building, A River Enchanted is a stirring story of duty, love, and the power of true partnership, and marks Rebecca Ross’s brilliant entry on the adult fantasy stage.

Rebecca Ross writes fantasy novels for teens and adults. She lives in the Appalachian foothills of Northeast Georgia with her husband, a lively Australian Shepherd, and an endless pile of books. When not writing, she can be found reading or in her garden, where she grows wildflowers and story ideas. Find her on Instagram @beccajross.

“A vivid fantasy that is impossible to put down.”  — Booklist (starred review)

“Vividly imagined . . . This will appeal to lovers of fantasy from Name of the Wind to the Earthsea series.” — Publishers Weekly

“With lush worldbuilding and lyrical prose, A River Enchanted feels like the echo of a folktale from a world right next to our own.” — Hannah Whitten, New York Times bestselling author of For the Wolf

"An alluring and rich tale, at once a fast-paced mystery and a love story as warm as a hearth. Like music, it will bewitch your senses, carrying you to the wind-swept hills and effervescent waters of the isle of Cadence. A River Enchanted made me homesick for places I've never been. This is a classic in the making." — Ava Reid, internationally bestselling author of The Wolf and the Woodsman

“Riveting and richly imagined, A River Enchanted flows like a song you cannot forget. Rebecca Ross has crafted a tale as tricksy and elemental as the human—and inhuman—heart.” — A.G. Slatter, award-winning author of All the Murmuring Bones

“Reading A River Enchanted is like being swept away by a song. The novel is exquisitely crafted and rich with emotion. I loved every word of it!” — Danielle L. Jensen, USA Today bestselling author of The Bridge Kingdom

“A River Enchanted is a melodic and sweeping tale filled with whimsical magic, unforgettable characters, and heartfelt romance. Every line is a lyrical masterpiece, breathlessly taking you on a poignant journey through the mystical isle of Cadence. I couldn’t turn the pages fast enough!   — Isabel Ibañez, author of Woven in Moonlight

“A tale that blends political intrigue with elements of a fantasy thriller. . . Ross has built a fully realized world clearly inspired by Scottish myth and legend and thick with heroes. . . A rich fantasy of bards and bairns in which the magical island setting becomes the main character.” — Kirkus Reviews (starred review)

"A sublime mix of romance, intrigue and myth, A River Enchanted is a stunning addition to the canon of Celtic-inspired fantasy. With its lyrical prose and tight world building, this story is both modern and timeless, drawing from the traditions of genre greats like Steven Lawhead and marrying them to the sensibilities of modern works like Genevieve Gornichec’s The Witch’s Heart and Tana French’s In the Woods." — BookPage (starred review)

“A complex exploration of nature, family, and what the idea of home means, there’s plenty to love here, and much to build upon in the Cadence duology’s forthcoming second half.” — Paste Magazine

"[Ross] has written into existence some of the most beautiful passages I’ve ever had the pleasure of reading in a fantasy novel....A River Enchanted plucked just the right notes for me, holding me bound in a bewitched thrall until the final page." — GateCrashers

"A gorgeous and thoughtful addition to the fantasy genre." — Popsugar

“The word that comes to mind when I think back on this book is 'lovely'. The characters in this novel are so well-written, you’ll forget you’re reading about fictional people.”  — Richmond News

“A River Enchanted swept me away from the very first page. A memorable cast, a unique magic system, and a mystery that will keep you turning the pages long past bedtime, Rebecca Ross’s adult debut is truly magical.” — Genevieve Gornichec, bestselling author of The Witch’s Heart

“A River Enchanted is exquisitely written with compelling characters and romance, and a gripping story that kept me captivated. I was swept away by the enchanting and magical world Rebecca Ross crafted, and loved every moment of it.”  — Sue Lynn Tan, author of Daughter of the Moon Goddess