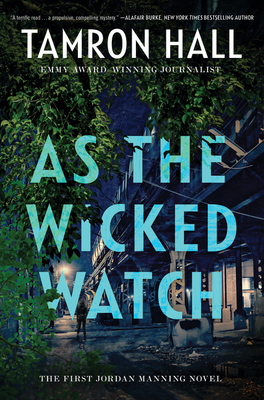 The first in a thrilling new series from Emmy Award-winning TV Host and Journalist Tamron Hall, As The Wicked Watch follows a reporter as she unravels the disturbing mystery around the deaths of two young Black women, the work of a serial killer terrorizing Chicago.

When crime reporter Jordan Manning leaves her hometown in Texas to take a job at a television station in Chicago, she’s one step closer to her dream: a coveted anchor chair on a national network.

Jordan is smart and aggressive, with unabashed star-power, and often the only woman of color in the newsroom. Her signature? Arriving first on the scene—in impractical designer stilettos. Armed with a master’s degree in forensic science and impeccable instincts, Jordan has been able to balance her dueling motivations: breaking every big story—and giving a voice to the voiceless.

From her time in Texas, she’s covered the vilest of human behaviors but nothing has prepared her for Chicago. Jordan is that rare breed of a journalist who can navigate a crime scene as well as she can a newsroom—often noticing what others tend to miss. Again and again, she is called to cover the murders of Black women, many of them sexually assaulted, most brutalized, and all of them quickly forgotten.

All until Masey James—the story that Jordan just can’t shake, despite all efforts. A 15-year-old girl whose body was found in an abandoned lot, Masey has come to represent for Jordan all of the frustration and anger that her job often forces her to repress. Putting the rest of her work and her fraying personal life aside, Jordan does everything she can to give the story the coverage it desperately requires, and that a missing Black child would so rarely get.

There’s a serial killer on the loose, Jordan believes, and he’s hiding in plain sight.

Emmy® Award-winning talk show host Tamron Hall is the host and executive producer of the popular nationally syndicated talk show “Tamron Hall.” Formerly of the “Today Show,” she has also hosted six seasons of “Deadline: Crime” on Investigation Discovery. While at NBC, she was a recipient of the Edward R. Murrow Award for her report on domestic abuse. Tamron currently serves as an advocate for domestic violence awareness.

“As the Wicked Watch is a terrific read—a propulsive, compelling mystery, but also a nuanced look at class and racial inequality. With Jordan Manning, Tamron Hall has given us a smart, empathetic heroine to cheer on for years to come.” — Alafair Burke, New York Times bestselling author

"Wow—Tamron Hall knows how to tell a story! And this timely and compelling thriller is a treat to read. Unflinching, revealing and authentic… Authentic and life-changing—and completely entertaining—this is the first of what is sure to be a long-running series from a beloved and talented journalist." — Hank Phillippi Ryan, USA Today bestselling author of Her Perfect Life

“Tamron Hall's debut novel As the Wicked Watch is a singular thriller that brings the vulnerability and systemic neglect of Black girls as victims of violent crime into vivid relief...The cohesiveness and sheer scope of the narrative Hall has woven together is impressive...Readers interested in the gritty details of crime reporting and investigation will be intrigued...Ultimately, As the Wicked Watch is an impressive debut — a moving take on familiar but urgent problems and society's indifference.” — NPR

"As the Wicked Watch — the first in a three-book series from Hall — is a thoughtful, captivating novel that highlights that, to some, tragedy is just a news story, but to passionate journalists like Jordan, the real people behind these tragedies are where the true heartbreak lies." — Shondaland

"The first in a series by Emmy Award–winning journalist Tamron Hall, As the Wicked Watch has all the hallmarks of a great thriller, with a fast-moving plot, an unforgettable protagonist, and lots of fascinating insights into TV newsrooms and the biases influencing whose stories get told." — RealSimple

“Emmy Award–winning broadcast journalist Hall’s outstanding debut and series launch introduces TV journalist Jordan Manning…Hall brings insight and nuance to such matters as journalism ethics, police treatment of murder cases involving Black women, and competition among journalists and their reliance on those behind the scenes. Readers will want to see a lot more of intelligent, ambitious, and assertive Jordan.” — Publishers Weekly (starred review)

"A pulse-pounding story that also provides a fascinating and important look into the difficulties of reporting on and finding justice for Black victims. Emmy Award–winning Hall’s extensive background as a TV journalist, including reporting for NBC and anchoring for MSNBC, infuses a great deal of credibility and behind-the-scenes verve to her first crime novel." — Booklist (starred review)

“Hall’s decades of field experience lend a lot of credibility to the story and provide a strong footing for an intriguing new crime series.” — Library Journal

"Tamron Hall’s new novel introduces a detective sure to become an icon...It is a powerful, clear-eyed novel that demands accountability, from its fictional world, yes, but also the real one." — CrimeReads

"The first in a planned series featuring reporter Jordan Manning, As the Wicked Watch is a well-paced and thoughtful crime novel that probes questions of race, representation and community care." — Shelf Awareness

"As the Wicked Watch is a promising start to a series sure to appeal to fans of badass women with mysteries to solve and something to prove." — BookPage

"With over 20 years of journalism experience, years spent reporting on crime and tragedies across the country, and her own personal experiences, Emmy Award-winning talk show host Tamron Hall is in the perfect position to launch this exciting new series." — Mystery & Suspense

"As the Wicked Watch gives a real glimpse of what successful Black women journalists must have endured to obtain and maintain their positions." — Salon

"A multifaceted diamond, As the Wicked Watch introduces a series that promises to trouble the mind and touch the heart." — Fredericksburg Free Lance-Star